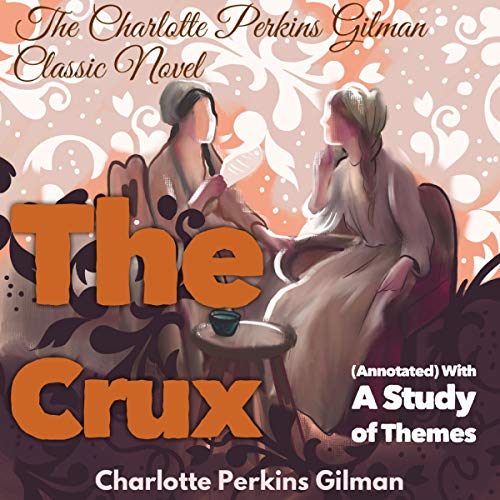 The Charlotte Perkins Gilman Classic Novel: The Crux: (Annotated) with a Study of Themes

Unique to this title is:

You may of course skip it and go straight to the main title if you do not want any spoilers and come back later to the beginning.

Charlotte Perkins was born in 1860 in Connecticut. When she was a child, her father abandoned his wife and children, and she spent the rest of her childhood in poverty. Since her mother was not able to support the family, her aunts played a big part in her upbringing.

Her schooling was erratic and she attended seven different schools in just four years, finishing when she was 15. To prevent her children from getting hurt as she had been, her mother forbade them to make strong friendships or read fiction.
Despite that, Gilman spent a lot of time in the local library studying ancient civilizations on her own.

The Crux tells the story of a group of New England women who move west to start a boardinghouse for men in Colorado. It is an important early feminist work that brings forward complicated issues of gender, citizenship, eugenics, and frontier nationalism.

I really enjoyed this book. Even though it was written some time ago, it seems as though it could have been written today as a period piece. The writing was excellent and the story well-told. I liked the very real issues women face(d) being a main theme of the book. I enjoyed getting to know the characters, who were a good sample of society. The narrator did an excellent job as well.

Circumstances right now prevent me from writing an extensive review. I will update my review as soon as I am able. I love the added content by the producers.

I really appreciate the additional discussion at the beginning of this book. It helps shed light on some of the important themes that are discussed in this book. The big one being the role of gender in society. The fact that this book was written so long ago shows tremendous insight. The narration is strongly performed and does this book justice.