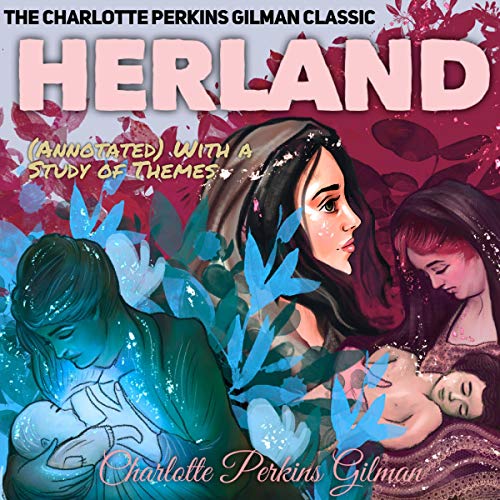 Unique to this title is a study of the themes present in Herland.

You may, of course, skip it and go straight to the main title if you do not want any spoilers, and come back later to the beginning.

Gilman was born in 1860 in Connecticut. When she was a child, her father abandoned his wife and children, and she spent the rest of her childhood in poverty. Since her mother was not able to support the family, her aunts played a big part in her upbringing.

Her schooling was erratic, and she attended seven different schools in just four years, finishing when she was fifteen. To prevent her children from getting hurt as she had been, her mother forbade them to make strong friendships or read fiction.

Despite that, Gilman spent a lot of time in the local library studying ancient civilizations on her own.

Herland is a utopian novel from 1915, written by feminist Charlotte Perkins Gilman, in which exists an isolated society composed entirely of women, who reproduce via parthenogenesis (asexual reproduction). The result is an ideal social order: free of war, conflict, and domination.

This is the second book I have read/listened to by this author. Having looked her up, I now realize this book is the middle of an essential trilogy. Now I’m very curious to listen to or read the others. There is a conclusion to the characters experience in Herland. I am guessing the very abrupt ending is because there is another book that follows the characters after their initial experiences in Herland. I really like how Audiobook Giveaways adds a forward to their books that includes a Cliff Notes style summary of the book, and major themes. They often added a more comprehensive forward with the history of the author, overview, quotes, etc. I understand Audible may be forcing them to limit this. I think that is unfortunate because the forward really adds to the book. ———

This is the fourth book I have listened to by this narrator ( Jessica Renfro) and I would listen to another. She does quite well giving each character a different sound and personality. Her pacing is good and pronunciation clear. ———

There are no explicit sex scenes, violence, or swearing. ———

It is really cool that a book like this was written so long ago and can still feel original. The narration of this book was very professionally done.