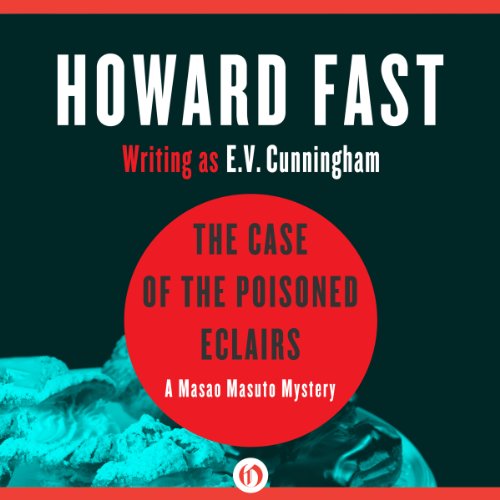 The Case of the Poisoned Eclairs

The Case of the Poisoned Eclairs

When a woman dies from botulism poisoning after eating tainted éclairs from her employer, the medical examiner believes that the lethal bacteria has been deliberately added to the pastry. Detective Masao Masuto is put on the case and discovers that the pastries were meant for a group of four wealthy divorcees. Soon, the bodies pile up - the boy who delivered the pastries and an ex-con chemist are both found dead - and Masuto must try to find not just the killer, but also who the real intended victim is. Narrator Brian Nishii's meticulous performance hits all the suspenseful beats of this murder mystery, and his Detective Masuto is refined and likeable, his calm demeanor edged with ironic wit.

In Beverly Hills, murder has suddenly gone out of style. For five weeks, the head of the city's tiny homicide squad, Zen detective Masao Masuto, has worked only robbery investigations. But after more than a month without a corpse, this dry spell is about to end.

The dead woman is Ana Fortez, a Chicana whose death was originally classified as terminal food poisoning brought on by a feast of botulism-infested clairs. But because botulism can only grow in an airtight space, the medical examiner warns Masuto that the fatal bacteria must have been purposefully injected into the pastry. When a wealthy housewife's dog drops dead after munching on premium chocolates, Masuto finds that her bonbons have been laced with the same toxin. He begins a search for a killer targeting the sweet tooth of Beverly Hills - proof that crime in Southern California never stays boring for long.