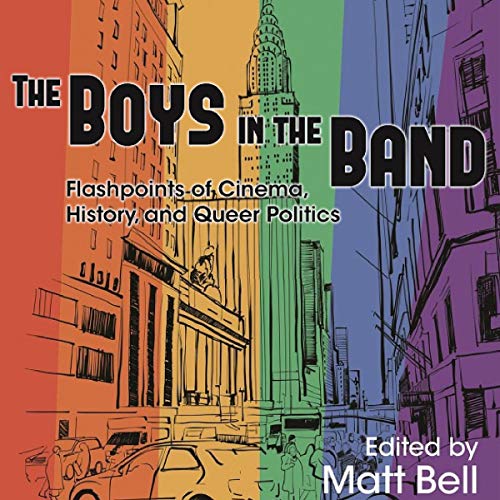 The Boys in the Band

The Boys in the Band's debut was revolutionary for its fictional but frank presentation of a male homosexual subculture in Manhattan. Based on Mart Crowley's hit Off-Broadway play from 1968, the film's two-hour running time approximates real time, unfolding at a birthday party attended by nine men whose language, clothing, and behavior evoke a range of urban gay "types." Although various popular critics, historians, and film scholars over the years have offered cursory acknowledgment of the film's importance, more substantive research and analysis have been woefully lacking. The film's neglect among academics belies a rich and rewarding object of study. The Boys in the Band merits not only the close reading that should accompany such a well-made text but also recognition as a landmark almost ideally situated to orient us amid the highly complex, shifting cultural terrain it occupied upon its release-and has occupied since.

The scholars assembled here bring an invigorating variety of methods to their considerations of this singular film. Coming from a wide range of academic disciplines, they pose and answer questions about the film in remarkably different ways. Many of the essays take inventive approaches to longstanding debates about identity politics, and together they engage with current academic work across a variety of fields that include queer theory, film theory, gender studies, race and ethnic studies, and Marxist theory.

The book is published by Wayne State University Press.

"Matt Bell has assembled an all-star cast of scholars for a significant critical reassessment of William Friedkin's landmark film and its role in queer cinema history… its insights are not to be missed." (Dwight A. McBride, Northwestern University)

"A very welcome collection and a unique and substantive contribution."(David Greven, University of South Carolina)

I found this audiobook while doing a search for the original cast recording of the play that I bought on LP in the 70's. That recording isn't available here yet, but this anthology of essays about the first film is one of the more interesting movie-themed audiobooks. I'll probably listen to it again after rereading the play or re-watching the two films based on it. The narrator does a good job, but I think it would have been fun if he had decided to imitate the actors in the film when he quoted lines from it. I know that would have happened in my mind if I had read it in print form.

The Boys are Beat!

This is long and drawn out. Repetitive with the story. Just plain boring. Waste of my credit. I would not recommend this book at all!