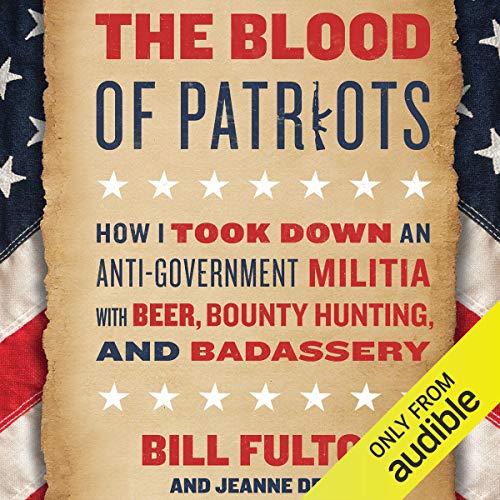 The Blood of Patriots

For Bill Fulton, being a soldier was his identity. He was called to protect and serve. So when the army wanted to send him to Alaska, he went - they had never steered him wrong, after all.

After an involuntary medical discharge, Fulton was adrift until he started a military surplus store in Anchorage, where he also took on fugitive recovery missions. He was back on his feet, working with other badasses and misfits he considered brothers. He took pride in his business, with a wife and daughters at home. His life was happy and full.

But when a customer revealed he planned to attack a military recruiting station, Fulton had to make a choice: turn a blind eye and hope for the best or risk his safety, his reputation, and his business by establishing contact with his customers' archnemesis: the FBI.

He chose the latter, and his life changed forever.

Fulton would soon find himself tumbling down a rabbit hole, learning of a militia movement afoot called "sovereign citizens" who believe themselves to be above the law. The FBI classifies this domestic terrorist group as the number one threat to law enforcement in the country.

Set against the vast, rugged, and sometimes lawless backdrop of Alaska, The Blood of Patriots is the story of an ideology gone bloody in the distorted belief that murder is patriotic. It is the true story of how Fulton wrestled his demons and became an undercover confidential informant for the FBI, helping to bring down a militia whose charismatic leader was plotting to kill federal judges and their families and law enforcement officers.

Fulton and The Mudflats' Jeanne Devon will take you on a journey through the dark and weirdly humorous life on the Last Frontier while exploring questions of patriotism, the meaning of the Second Amendment, and the legitimate exercise of governmental power. The Blood of Patriots reveals the seamy underbelly of our nation's militia movements and reminds us of the true nature of patriotism.

A really great listen to. Kept my attention on every word. One of the best author narrations I've heard. You could tell by the sound his voice he was really going back to his memory of the situations he was in. You need to listen to this book. Thanks for your service to the country...