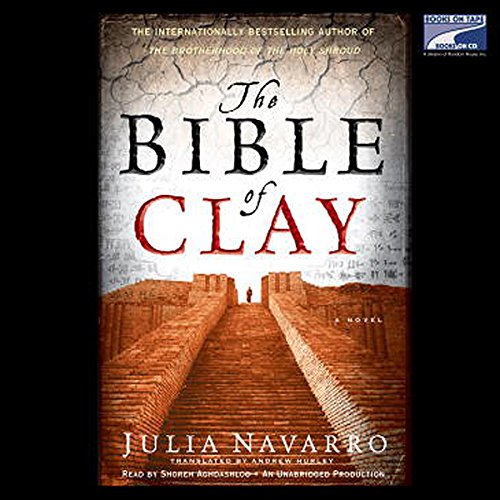 The Bible of Clay

In St. Peter's Basilica, a man sits in a confessional asking forgiveness for a murder he's about to commit. And a young priest begins a desperate journey to stop him....

It's only the beginning of a ruthless race among the world's most powerful to find a rumored cache of sacred texts inscribed with the story of Creation as told by Abraham. This account, on tablets of clay, predates the Bible by a thousand years and could be one of the most important discoveries of all time.

Archaeologist Clara Tannenberg's announcement of an excavation to seek the tablets has set off shock waves of outrage, contempt, and outright disbelief. But among four old friends, bound through decades by shared tragedy, the announcement has renewed their hunger for revenge. For Clara's reclusive, infamous grandfather Alfred is a man as feared as he is hated and his enemies will stop at nothing to destroy him - and will use anything as a weapon...even his granddaughter.

As Clara and her husband Ahmed put together a ragtag team to excavate the Bible of Clay from deep within the heart of Iraq, another far more sinister team is determined to get there first. Sweeping from the time of the biblical patriarchs to the front lines of the Iraqi conflict to the parties and back rooms of Washington, D.C., The Bible of Clay is a thriller of unrelenting, thought-provoking, and all-too-plausible suspense.

“Navarro has crafted an intriguing adventure book that has what sells today: a dash of politics, a cupful of religious artifacts and lore, and brave characters determined to find the truth against all odds.” (FreshFiction.com)

the bible of clay

The story was non-eventful, very little emotion involving each character, and it took too long for events to happen. The most important was that it was extremely hard to understand!

20 hours of a ponderous plot, tepid suspense, and an unsatisfying conclusion...AND to top it off, the narrator has absolutely no tempo or inflection in her recitation...there is nothing redeeming in this offering

Do not expect a Dan Brown escapade

Disappointing book. It is far too long. The characters are ridiculous and totally unsympathetic, it is impossible to care what happens to any of them. The narration is monotonous and poorly executed. The plot is out dated and so slow.

No, the story drags itself out painfully from sickening moment to dull denouement. It's not often I find a book where I can't identify with a single character but this one is particularly disgusting.

What could Julia Navarro have done to make this a more enjoyable book for you?

The best thing would have been to find a good editor who would not allow her to unnecessarily complicate things and drag things out beyond their usefulness.

She seems as much in a hurry to finish this book as I was. Her voice is lovely but her accent and speed don't allow for much characterization. At times my brain quit listening because it was simply a torrent of words.

Did The Bible of Clay inspire you to do anything?

You know there is a problem when you have a 20+ hour book that the narrator had to speed reading through. I'm not sure if that was to try and keep this interminable book under a certain time limit or if they were as disgusted with the characters and plot as I was.

I gave several chapters but could never get into it. The narrator made it very difficult to understand when the speaker was switching. Slow slow slow slow

The story might be good but the narrator is so bad I can't tell.

This novel is a well-told tale with an interesting plot, surprising twists, and well developed characters set against the emotional and political backdrop of the pending American invasion of Iraq. However, the narration is problematic. Mispronouncing English is less distracting than the almost total lack of tone, accent, or pace changes for different characters (and there are a lot of characters) so that scene shifts are sometimes unrecognizable. I several times had to rewind a bit to figure out what (and who) was going on. That said, the book is marvelous.

I haven't written any other reviews but this one needs to be done. I really have no idea what the book is like. The narrator's accent is hard to understand, along with the fact that she misses most inflections that emphasize some parts, mispronounces many words, and doesn't change tone to distinguish male from female, much less individual characters. There is little or no emotional content in the narration. By the time I can figure out a lot of what she is reading, the story has moved on. I can't really get a sense of the book this way.

As the previous reviewer states this is a great story with many twist and scene changes going from Abram to shortly before the Iraq war, with stops at WWII along the way. But the use of the heavily accented narrator is hard at best. This would have been much better if Brick or Twomey did the narration. English distribution means we listen in English please.

Narrator is difficult to listen to

The story was intriguing but the narrator’s voice was distracting and annoying. Would have enjoyed more with a different voice talent.

Not as good as expected

What a disappointment! The story is unsurprizing and predictable. Too many characters prevent an indepth characterization of each.
The voice of the narrator is smoky and deep, therefore mostly nice to listen to, though heavily accented and despite often incorrectly pronounced reading.