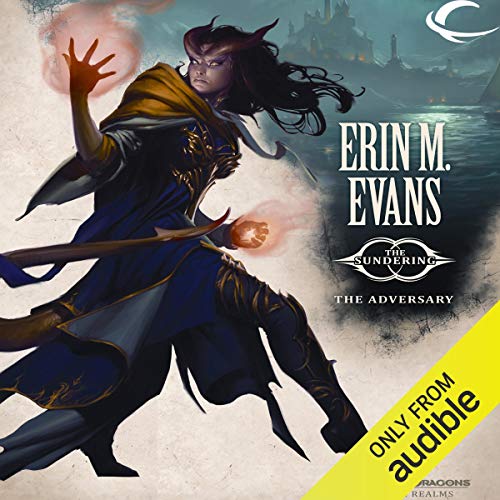 In this third book of the Sundering series kicked off by R.A. Salvatore and the dark elf Drizzt, SCRIBE award-winning author Erin M. Evans thrusts her signature character Farideh into a maelstrom of devilish politics and magical intrigue that will have far-reaching implications for the future of the Forgotten Realms.

As the chaos of the Sundering rages around her, young warlock Farideh faces a more personal turmoil wrought by a deal she made with a devil years ago. Hoping to protect her twin sister, she leaves everything she holds dear to assist a wizard in a scheme that pits the devils of the Nine Hells against the gods above.

But when Farideh casts the spell to enter the wizard’s remote mountaintop fortress, she picks up a stowaway - a Harper agent named Dahl who isn’t so inclined to follow devilish demands.

Dahl attempts to escape only to run into a village of odd people, lurking behind an impenetrable wall. Forced to gaze into the villagers’ souls, Farideh points out the ones who seem different, only to watch as the wizard’s guard carts them off to fates unknown. Are these villagers or prisoners? Are they blessed or doomed by the gods? As the wizard’s guessing game proves more and more diabolical, Farideh resolves to unravel his secrets - even if it means she’ll lose her own soul to the Nine Hells.

A very very good story, a very good book giving a lot of knowledge about warlocks and Devils. The reading is amasing as well like one of the best I've heard and I've heard a lot

This book is the third book in two separate series. It is the third book of The Sundering Series, and the third book in the story of Farideh, Erin M. Evans' premier character. You do not need to listen to the first two books in The Sundering Series in order to enjoy this book -- "The Companions" and "The Godborn" has almost nothing to do with this book. However, you probably do want to familiarize yourself with Ms. Evans' other two books: "Brimstone Angels" and "Brimstone Angels: Lesser Evils."

My major critique of this book is that the B plot-line obstacle (between Havilar and Brin) seems particularly forced for the sake of a delayed climax that fits into a traditional narrative arch. I hate to say that it rings false, because this is all just make-believe anyway, but it does.

On the plus side, I think Dina Pearlman has really improved as a voice actor since the last book in this series.

Dina Pearlman as Narrator - want my money back!

A different Narrator - no inflection differences between characters, difficult to follow and distinguish between characters. Maybe Ms. Pearlman could add an accent here or there so I can tell who is saying what. Aweful!

not possible to determine. I'm sure the story is great, but the Narrator is just so bad. I could only last 2 hours of the book.

Who would you have cast as narrator instead of Dina Pearlman?

What character would you cut from The Adversary?

I would like to request from Audible for my money back to apply to another book. I am a prolific user of Audible and spend allot of time on the road. I sincerely hope my comments don't fall on deaf ears....this presentation of the Adversary by Ms. Pearlman is truly not worth purchasing or listening to. I currently have 17 hours remaining on the book tape, which will not be listened to. After 2 hours of listening, I can't take it anymore!

The narrator while having a voice pleasant enough to listen to, butchers the story. She uses several different voices for most of the characters, puts odd inflections where all of the female characters sound like they're "Valley girls" . I had a hard enough time just reading the book when it came out and it was almost as difficult to listen to.

Easily the best of the Sundering

If you could sum up The Adversary in three words, what would they be?

This may be my favorite a Realms novel ever. Evans integrates the world in a top notch fashion the way the leaders in the setting often don't. She, likewise ties in with the other Sundering books in ways both meaningful and interesting. All this in a story involving some of my favorite things, Chosen, devils, and Harpers. Every third tier character deserves a spin off story because that's how interesting and real they are written. The performance was also spot on. I think this is the first D&D audiobook where I didn't hear any mispronunciations that took me out of the story.

I love the quick pace and constant action, start with book 1 however as you really need the backstory.

Interesting characters and a great story.

going to return the book - narrator ruins it

I am going to return this book later on today. I tried repeatedly to get this book started but I just can't keep my mind on the story. I am a huge Forgotten Realms fan and love most of the novels but last night I finally bought the Kindle version and am already several chapters into the book and enjoying it. I've dealt with bad narrators before, I have over 150 audiobooks after all, but speeding up the narration to 1 1/4 or faster didn't help. I am not a huge fan of "Fareeda" (phonetically spelled from the way the narrator pronounces Farideh's name) but the 3 of them are fun to read about. I mean Farideh, her sister and the prince. After a spell they are very likeable but again, only in print, at least for me.

this may have turned out to be a good book. but with the horrible narration of this woman I could not follow but a bit per chapter.

I was not expecting a teenager level emotional story with some few moments of actual plot. I could not finish because I couldn't get invested in the characters.

It is terrible to have to read this for the Sundering series.

I've had to listen to this twice to even know who the characters were. Actually I still don't. This book was hours and hours of "he said" "she said". Oooh wait then he said something else. I had no clue what so ever what was going on. Where people were. Hell I couldn't even tell what people were. I'm just glad it's over and I can get on with the Sundering. I'm a huge forgotten realms fan but I avoid Evans at all costs when I can. On top of no story at all, the narrator made demons sound like irritating teenagers.

Great but you have to pay attention to characters

Would you try another book from Erin M. Evans and/or Dina Pearlman?

yes both are great

yes it was great

Could you see The Adversary being made into a movie or a TV series? Who should the stars be?