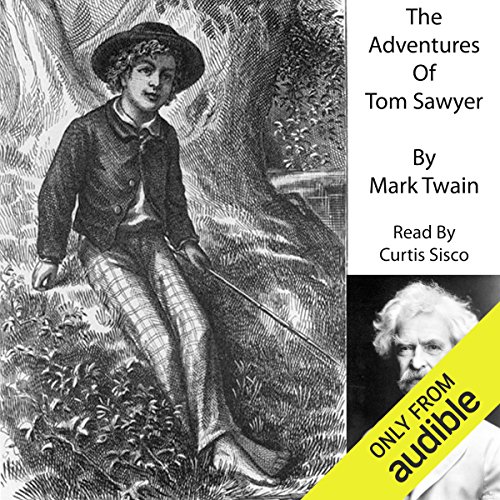 The Adventures of Tom Sawyer

Twain called this story a "hymn to boyhood". Loved by all ages in countless renditions in all media. A classic piece of American literature.

Fun story but the reading felt a little mechanical

What aspect of Curtis Sisco’s performance would you have changed?

As an adult I enjoyed listening to this classic. Sisco is really good with the characters' voices, but in the general narration he reads quickly and somewhat mechanically. This version is at least an hour shorter than the next shortest Tom Sawyer audiobook because of Sisco's fast pace. I'd hoped to have the illusion that Twain himself was reading to me, with a languid sly drawl. But this narration was a little bit stiff.

The narrator did a good job... Spoke clearly and all. I was just spoiled because I listened to Elijah Wood's Huck Finn first and it can't be compared.

Recommended but not a must

THE ADVENTURES OF TOM SAWYER, by Mark Twain
Unlike Adventures of Alice in Wonderland, I don’t consider Tom Sawyer essential adult reading particularly if you have not read your own fundamentals (in my case, the Classics, Vargas Vila, Thomas Hardy, Hugo, Wilde, Dickens, Stendhal, Flaubert, and others). The narrator, Curtis Sisco, was fantastic in keeping pace and recreating the regional accents thereby making the experience more enjoyable. The book is entertaining, funny, and it is not entirely devoid of social message. Recommended (3 stars) but not Highly Recommended or a Must Read (4 stars), let alone a Masterpiece (5 stars).

The following is a book summary: don’t read unless you are not reading the book.

Tom Sawyer is a clever orphan boy who lives in St. Petersburg, a poor village by the Mississippi around 1840 with his Aunt Polly and his half-brother Sid. He is mischievous, smart, unafraid, and willing to do anything for a thrill. We first meet him in the pantry eating jam and hiding from his aunt Polly. The book narrates a series of adventures that famously include not only conniving his fellow friends to white wash (i.e. paint) a fence, a chore he must do as a punishment for a bad deed, but even more ignominiously, making his friends pay for it. He then uses the collection of assets gathered from the deal to exchange for tickets at church in order to get a bible. Obviously, he is not interested in bible study; he wants to use it to impress a girl named Becky Thatcher whom he eventually kisses and falls for him.
We soon meet Huckleberry Finn, a badass outcast boy whose latest acquisition is a dead cat which he plans to use “to cure warts”. Thing is though that It will only work if they witness The Devil take the soul of a wicked man buried at the cemetery at midnight. Sure enough, when they are there, they get to witness a bad guy, -Indian, of course- or at least “half-breed”, named Injun Joe to kill an accompanying doctor and blame his drunken partner Muff Potter. Fearing for their life Tom and Huck run away, swear and sign with blood never to tell what they just witnessed. Soon after though, knowing that an innocent man will surely be hanged, Tom gets depressed, feels remorse and escapes with his friend Joe Harper to a desolate island on the Mississippi to lead a life of pirates. Of course Huck Finn soon joins them and they hang out together for a few days. In the village meanwhile everybody mourns as they think they’ve drowned. The three boys get bored in the island and come back to town just in time to witness their own funeral. Of course they become instant heroes. Armed now with courage and plagued by remorse, Tom testifies at the trial of Muff Potter. Injun Joe is exposed, he escapes through a window and skips town.
From there on out, the adventures continue, Tom and Huck become aware of a treasure that Injun Joe is hiding. Tom and Becky get lost at a cave during a school trip. They spent three days lost in the cave. While trying to find his way out, Tom discovers Injun Joe hiding his treasure at the cave, and through a series of un-?-fortunate events, Injun Joe dies in the cave, trapped. Tom escapes, goes to town to get Huck to recover the treasure and the instantly become rich and famous.
Huck hates his new rich plush life where he must behave and follow rules and social norms. Fed up he escapes to the freedom of the wild. Tom knows where to find him. He convinces him to return to society only by promising him that they will become bank robbers.

Would you consider the audio edition of The Adventures of Tom Sawyer to be better than the print version?

I bought this for my granddaughter. She was having a little trouble with reading the book herself and I told her that a audio book might help her to engage in the story. She is 11. She really enjoys the story and follows along with the book.

What other book might you compare The Adventures of Tom Sawyer to and why?

I am not sure.

Have you listened to any of Curtis Sisco’s other performances before? How does this one compare?

I thought I lost the audio on the computer and I tried to find it with no success and downloaded another from a different company. I was so excited when I was able to recover this one because the narrator makes or breaks enjoying a audiobook. Curtis Sisco is an awesome narrator. Thank you Curtis:)

It keeps your attention.

Thank you for having this book available.

What did you love best about The Adventures of Tom Sawyer?

Curtis Sisco does a fine job on reading the classic Twain story. He captures the accents and tone of the area and time period. I haven't read the book since I was a child and found it to be surprisingly adult even though it was written for kids. Because of the price it's the perfect book to test if you are new to audio books.

Tom's aunt was my favorite because as a parent I sympathized with her every thought. The joy and pain of raising a child (especially one like Tom) is all worth it in the end.

Have you listened to any of Curtis Sisco’s other performances before? How does this one compare?

It's been done before so wait to rent the DVD.

Refreshing break from a lot of heavy big books. Read it in Elementary school. I enjoyed it.

meh the reader was rather dull

i never read it as a kid but watched a few of the movie adaptations of it do i thought id give it a try. it was more entertaining as a kid and forced myself to get to the end.

No one needs my review of this classic. I will leave one anyway to praise the talented voice artist.

15 words is too much to require for a classic book. Of course it's good, brings a smile to the child in all of us.

Every boy must know this story, and every man should reread(listen) to it from time to time to remember their own sense of adventure.