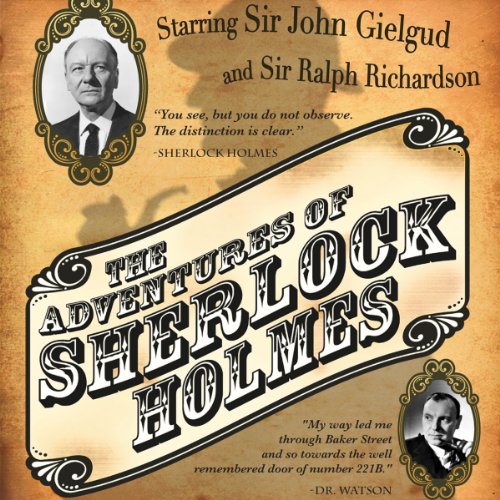 The Adventures of Sherlock Holmes

"The original and immortal stories of Sir Arthur Conan Doyle…"

Sir John Gielgud stars as Sherlock Holmes with Sir Ralph Richardson as Dr. Watson. John's brother, Val Gielgud, the celebrated mystery author and producer, directs several episodes and co-stars in one of them... as Sherlock's brother! As a finishing touch, Orson Welles plays the evil Moriarty. The shows created by this very special team are possibly the greatest Sherlock Holmes radio programs ever produced. This set features all sixteen episodes in their most complete surviving examples - taken from what currently exists of the syndication masters.

Come hear tales of mystery and murder, espionage and intrigue, revenge and resolution in the gas-lit London of Queen Victoria, hansom cabs, and one brilliant Baker Street detective.

It's elementary to buy this

Good voice acting, sound affects are good and it's Sir ACD's work dramatized anew, what's boy to like. Definitely worth it for those who like Sherlock Holmes or radio dramas.

The audio is a bit off from time to time, but nothing that completely ruins the stories.

Where does The Adventures of Sherlock Holmes rank among all the audiobooks you’ve listened to so far?

Highly, although it is a radio broadcast and not an audiobook.

Richardson and Gielgud are the BEST cast for Sherlock Holmes stories.

Which character – as performed by Sir John Gielgud and Orson Welles – was your favorite?

They are both excellent

The voice acting in these incredible stories brings me right there to 221B. I can't recommend these enough.

Loved it . Have listened to it several times. Great production, very well done. As for the actors, well, what would you expect from 2 of the finast actors ever!!!

The violin was awful

I was excited about this book. The narration was great. The violin in between scenes got very tiresome and I couldn’t keep listening to it. I am going to return this and look for something else.