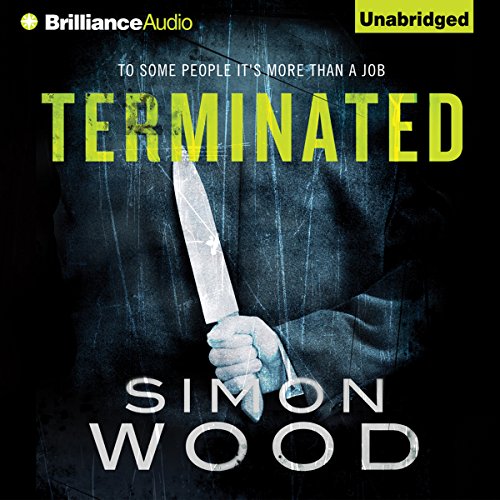 For Gwen Farris, the nightmare commences with the flash of a knife in a darkened parking lot.… That’s where Stephen Tarbell begins to exact his revenge against her for giving him a poor performance evaluation, for getting the promotion he believed was rightly his, and for being the woman who finally drove him over the edge. The threat escalates to an onslaught of physical and psychological intimidation so relentless that it threatens to destroy everything Gwen holds dear. And with the authorities unable - or unwilling - to help, Gwen has to take on Tarbell herself. But how do you stop a madman whose hatred knows no limit?

In a world where workplace insecurity meets violent obsession, only one thing is certain: Someone’s going to get terminated.

Excellent story. At times so intensr I had to stop listening! Highly recommended. As are all his books. Narration great.

The co-worker from hell!

Gwen Farris had only been head of the Quality Assurance department at Pace Pharmaceuticals for six months when it came time to do the employee performance evaluations. All was going smoothly until she reached Stephen Tarbell. His performance did not meet Pace's minimum level, and when she explained this to him, he was livid. He had been at Pace longer than anyone in the department and was up for the head position, only to have Gwen snatch it away from him. A clear case of an equal opportunity hiring if ever there was one. The bad evaluation pushed this borderline sociopath over the edge.

Gwen was working late and was the last person to leave the building. As she approached her car, the only one in the parking lot, Tarbell jumped out from behind the dumpster wielding a knife. He threatened to kill her if she did not change his evaluation to one more acceptable to him. Gwen, fearing that Tarbell would follow through on his threat, agreed to his demands. However, once she was safely at home, she called the head of Human Resources and told what Stephen had done in the parking lot. Gwen agreed not to call the police and let Pace's in house security firm, Private Security International, investigate the matter to build an iron-clad case against Tarbell and ultimately terminate his employment.

Once the investigation was under way, it became clear that Tarbell was a very smart and diabolical criminal. He had avoided the security cameras in the parking lot and there was no record of what had transpired there. Additionally, Tarbell discovered that Gwen had turned him in. This infuriated him even more because Gwen had reneged on her promise. He vowed to destroy Gwen - first her job, then her family, and after she saw everything she held dear vanish he would take her life.

What followed was a methodical dismemberment of Gwen Farris' life. Tarbell was a sick and twisted man, and as the novel progressed became even more so. Gwen was ultimately forced to sink to Tarbell's level to save what was left of her life.

This was a very fine and well crafted story, and the scary thing is that people like Stephen Tarbell actually exist in our society. Some of the events in the book seemed a bit far-fetched to me, hence only a four star rating. Other than those small details, the book was enjoyable and hard to put down. The climax was very exciting and tied all the loose ends together. All in all, it was very much worth my time.

Some coworker he was

I enjoyed the story Terminated very much. The characters almost came off the page and into the room with me. Emily Beresford did an amazing job bringing life to Gwen and Steven. Steven became very real and at times made my stomach turn he seemed so real and scary. Terminated had a very good storyline, and I could see someone getting caught up in a situation like this with another coworker. I liked that many of the chapters were short and kept the story moving quickly.

Simon Wood writes amazing Stories that use elements of violence and psychological torment to draw his readers in. You will have to read the story of how Gwen Farris is tormented by her coworker Steven Tarbell.

When it started, I didn't know how they would make s long book out of s bad job review but Wood did and made it believable without being corny.

The publisher's summary tells enough about the story line, but it does not adequately portray the suspense. Author Simon Wood tells a frightening story. Some reviewers have complained that the protagonist was stupid and that the story line is not credible. I strongly disagree. Narrator Emily Baresford could be criticized for not even trying to do male voices, but I find that better than doing them badly. I highly recommend Terminated for those who like really intense suspense.

This was definitely an emotional roller coaster ride. At times I would have to stop reading/listening due to how much anger and frustration the situation caused. This is not a bad thing. This tells me the author did his job because he caused a genuine response to the reader. It definitely isn't boring. Poor Gwen was attacked from every angle. Not only from her assailant, but her employer, coworkers and the people that were supposed to protect her. If you are a victim of an assault or stalker, this may cause triggers. It did for me when I didn't even know I had an issue with my past experience. If I were Gwen, I would be going to the media and a lawyer about my employer not protecting me and wanting to not involve the police. They never hesitated when they thought the tables had turned and she was stalking her coworker who was the guilty party. But things like this almost never get the justice they deserve. Out of all Simon's books I've read/listened to so far, this is my least favorite. I think because it reminded me too much of my stalker and harasser. By the end, I was ready for Gwen to just say kill me already. There's so much I want to explain but there's no way to give the kind of review to do this justice because it would require revealing spoilers. There was someone in the end that helped her that was a nice twist. I sort of saw her using him but didn't know how well it would be figured in. Well, actually two people. I was sad about what happened to one character that I really liked. I was screaming NO at the author and flinging my iPad across the room! He knows how to get my blood pressure up! I bet he's laughing right now as he reads this review. **Raspberries to you, Mr Wood!** lol.

I wasn't crazy about the narrator. She was good, don't get me wrong. Great with the female voices. But most of the male voices sounded the same. I liked his other narrators better. I think I would like this narrator with other types of books.

If you like thrillers and fly by the edge of your seat, you will love this!

I am hooked on this author! His stories are riveting from the beginning throughout the whole story! This one had me so frustrated for the main heroine through the story!

Just read the book TRUST ME!

The book it self was good when I read it. I tried to listen to the book when I was doing other things, but the women making the horrible male voices and the annoying 3 year old voice was unbearable! Then I would still hear HER voice when I was reading, narration ruined this book for me!