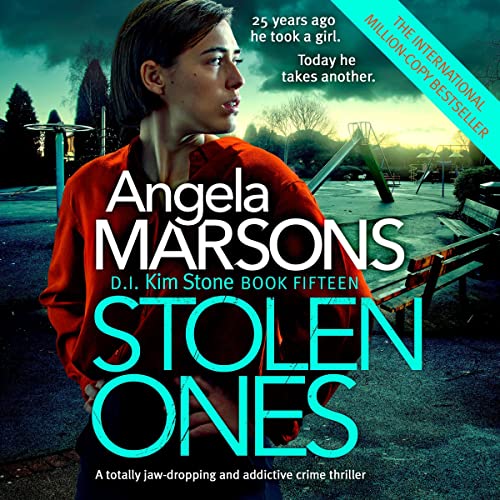 Kim felt sickness sweep over her as she watched little Grace dust off her dirty hands. Blonde curls tumbled around her face. Then, Grace disappeared into the crowd. Kim wanted to pause the recording, run outside, and grab her to stop what was about to happen.

One August afternoon, eight-year-old Grace Lennard skips into the garden of the childcare center she attends and vanishes into thin air. Rushing to the scene of Grace’s disappearance, Detective Kim Stone finds a chilling piece of evidence: the engraved heart bracelet belonging to Melody Jones - the little girl who was taken from a playground exactly 25 years ago.

Hours before, Steven Harte had walked into Halesowen police station and confessed to having information that would lead Kim to Melody. And he told Kim she’d have a more urgent problem to deal with first. Now Kim must play Steven’s twisted game if she’s to find Grace alive.

With only 24 hours to make every second of Steven’s interrogation count, and scan his behavior for hidden clues, Kim and her team soon link Steven to the abduction of several vulnerable girls - two were kept for a year and then released, unharmed - but where are Melody and the others?

Then small bones are discovered in the grounds of a local park, and Kim fears the worst.

Kim may think she’s close to convicting a killer, but the case is about to get even more complex. Steven is hiding one final explosive truth, and he’s not the only one. Dr. Alex Thorne - the evil woman Kim did her best to keep behind bars is about to reveal a shocking secret to Kim that will hit her where it hurts the most. Kim knows she must put aside her own demons to save Grace and find the other missing girls in time. But can Kim untangle Steven’s web before any more innocent lives are lost?

An edge-of-your-seat thriller that will leave your heart in your mouth. You will be totally hooked on the utterly addictive, number one, multimillion-copy best-selling Detective Kim Stone series.

"OMFG… Nail biting, thrilling, and riveting the author has pulled out all the stops…deliciously satisfying." (NetGalley)

I am so sorry Angela. I am still your biggest fan.

So sad to give this book 3 star because Angela is one of my favorite mystery writers and I can't wait for each new release.

I love her books. I also love Angela because she treats her readers like a community and will actually respond to messages, which is lovely and so unheard of.

Do not start your journey in this series from this book....or maybe start here but know the rest are so much better.

I read all the books in this series and this one was not my favorite. First of all, usually there is more team releated stories, which are bonding opportunities, allowing reader to feel like they are part of Kim's team. Thats one of my favorite parts about this series, feeling like I am there part of the team being verbally abused by Kim. What can I say I have issues lol. This book bases all the characters story lines on past books and it is hard to care about anyone. Or maybe I should say there is no opportunity to care.

I also agree with the other reviewer that Alex Thorne, evil psychiatrist, must be killed off or permanently handicapped....Maybe she can die immediately in car crash and Kim can investigate her death? She must have made more than one enemy so that will be an interesting story. Or maybe she can face someone more psychopathic than her who will outsmart her and bury her alive in the woods, she will go crazy and finish in mental hospital with Kims mom, so kim will never know who died whem she get the call?? Point is we need a new vixen. She became predictable and boring and its hard to care about her.

Tracy Frost, I missed you so much. You are such a great unofficial addition to the team.

Tracy was mentioned in one paragraph so if you do not know who she is yet again great opportunity to catch up.

Bryant who is usually a support character felt omitted and in all honesty I even missed Kim's dog.

Overall story line was very very unlikely to play out as it did so it was hard to be interested in it.

If someone does not want to read the entire series but wants to read future books, this book maybe a good starting point. It has a lot of refernces to all the other story lines. At least 3 references to Mikey. I feel traumatized by that event at this point lol.

I feel empty, and disappointed, and need to recover from this trauma before next book. I know Angela will turn it around.

Audio: As always love the narrator.

Now this is getting repetitive. Why does Kim continue to entertain Alex? A simple hang up would have made this book a lot shorter. It’s getting annoying

Good but tired of Alex Thorne

Really not thrilled that Alex Thorne is going to be back on the scene. I was happy to be done with her several books ago. Usually, I don’t even bother reading what the next book in the series is before I buy it. I will in future, and skip any that have Alex Thorne as the bad gal, (AGAIN).

i loved this series

I'm sad this series is over! i loved all these books! i could not stop listening to her books. highly recommend this series! good story, i laughed. cried, and was completely enthralled in the character kim stone.

Jan Cramers different characters are phenomenal. Looking forward to what happens next with Alex and Kim. This is a must read.

Can't wait for the next book!

Master's at their craft.
the narration fits the story perfectly. I appreciate the authors orginal stories. So many times when I read or listen to a book I can find a recycled plot line . Not with these books. I highly recommend this book.

Possibly the best one

I’ve listened to them all. This is possibly the best one now, and the performance, as always, was great.

So far, this one was my favorite!! Waiting anxiously for the next one !
Enjoy! I know you will!!

Wow did not see that coming!

I will not give a book summary. I will give an unspoiled short review. Fantastic book and I was truly surprised at the shocking ending. Also the ending was sad because it proves that making a decision is not always black and white. Damn. I can't wait to read the next book.

enjoy many of the Bookouture authors

However, the website is garbage for following any of them. Just thought you should know.