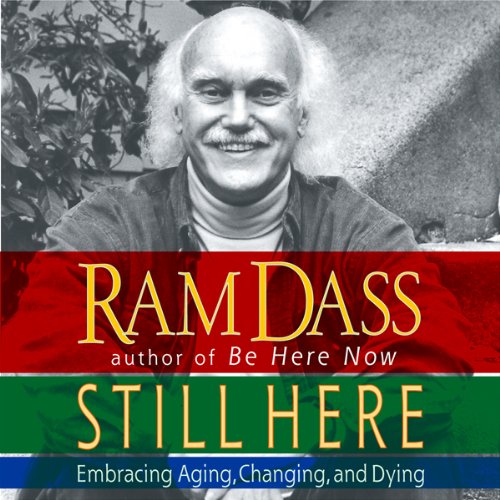 Still Here: Embracing Aging, Changing, and Dying is Ram Dass' reflection on the joys, pains, and opportunities that appear as we age. In 1997, Ram Dass suffered a nearly incapacitating stroke that affected his speech and movement. Over the next two years, he worked to regain his damaged capacities. From this experience he has produced a timely and thoughtful book that touches an important contemporary issue - our fears and apprehension about aging.

In the 1960s Ram Dass was a Harvard professor who turned to Eastern religion to answer the questions troubling his generation. He shared his story in the landmark classic, Be Here Now, which instantly captured the spiritual longings of his contemporaries. In Still Here, Ram Dass once again brings understanding, common sense, and reassurance for those of us facing the final season of life.

Well worth listening to

I really enjoyed this book. The book relates spiritual concepts to the subject of aging very well. The viewpoint throughout is very positive, even the section on death. Ram Dass is a unique voice among American spiritual teachers....if you have read him before you will enjoy this, if not it might be better to start with one of his earlier books.

material is great, but...

I love and admire Ram Dass. This is a wonderful book. Unfortunately, the narrator's voice really got on my last nerve after a while. He does a fine job, but his voice is the kind of voice we hear in commercials and movie trailers--dramatic and "growlly" (if that's a word). I found myself being annoyed by the voice rather than listening to what was being said. You may not have this problem, but it sure messed up my listening pleasure!

Can't get pass it's not Ram Dass speaking

Like I said in the title I'm so used to Ram Dass's voice, his sense of humor, his natural ability to tell stories that this bland, formal, no fluctuation, boring reading of the text killed it for me. Maybe, if I read the book myself it would be better. I gave up on the audiobook after an hour though.

messages I needed to hear

Would you consider the audio edition of Still Here to be better than the print version?

Yes. His stories are better heard than read.

What was one of the most memorable moments of Still Here?

His report of his illness was fascinating. A play-by-play of a potentially life taking event.

His litany of fears associated with ageing. I can relate so well.

What did you learn from Still Here that you would use in your daily life?

Take myself and life lightly. Hold my beliefs that way too. In a conversation with another listen in a way that allows for the possibility of changing my mind on the subject we are discussing.

Am recovering from health issues now myself and this time through I hear the story and his point of view more deeply. This book can speak to anyone, though.

Truly enjoyed. The voice recording reading the book was wonderful. I almost forgot it wasn’t ram dass’ voice. It was kinda of cool actually!

This book gave me many moments to ponder what i think about death. Where my fears lie... and allowed me to begin to put shape to them. So I can move with them. Never before have I been able to eloquently put my fears into a precise package. Grateful to have stumbled on this!!

Good to listen while quarantined alone

Absolutely inspiring story.loved every minute of it. Plan to listen again shortly. My first effort at trying to see how I feel about aging and dying and was encouraged, hopeful and moved. Namaste