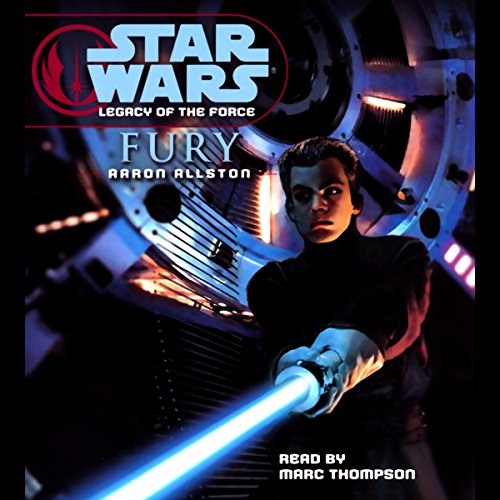 Fighting alongside the Corellian rebels, Han and Leia are locked in a war against their son, Jacen, who grows more powerful and more dangerous with each passing day. Nothing can stop Jacen's determination to bring peace with a glorious Galactic Alliance victory - whatever the price.

While Luke grieves the loss of his beloved wife and deals with the guilt over killing the wrong person in retaliation, Jaina, Jag, and Zekk hunt for the real assassin, unaware that the culprit commands Sith powers that can cloud their minds and misdirect their attacks - and even turn them back on themselves.

As Luke and Ben Skywalker struggle to find their place among the chaos, Jacen, shunned by friends and family, launches an invasion to rescue the only person still loyal to him. But with the battle raging on, and the galaxy growing more turbulent and riotous, there's no question that it is Jacen who is most wanted - dead or alive.

What disappointed you about Star Wars?

Great story and the narrator Marc Tompson is fantastic. These abridged versions however are a huge disappointment. I will finish the rest of this story but will no longer give up my credits or purchase any more of these abridged versions ever again. It sucks that the producers and random house audio have created so many abridged books.. They are a huge let down. I feel some what ripped off. I have some titles that are 40+ hours of content and cost 1 credit. These are barely 6 hrs and are so chopped up as to take more away they give.

Anger! At the abridgement!

I've been a huge Star Wars fan since I was kid and saw the original movie for a friend's birthday party on May 29, 1977, but I don't think I'll be buying any more SW books...

A) The abridged versions are terrible. A big part of the SW universe is the description, most of which is cut out in the abridgement.

2) The current and future books are all in nine-or-ten part series. It seems like the authors and publishers are just stringing the readers along... A single story from beginning to end costs well over $100.

Would be 5 stars if it was unabridged.

I cant stand all the abridged legends books. Put them all on the essential list and redo them the right way.

Favorite book in this series so far.

This book kept my interest the entire time. Enjoyed it very much. can't wait to listen to the next one.

I enjoyed this story but it had some points that shocked me. It has some Mandalor segments which I enjoyed. I listen to this story that left me with know words.

Man this should have been the story adapted for yhe bog screen. Would love to see Luke vs Jason and the teins battle in a movie. Love these books tho

Read the paper back, listen to the movie.

This is one of the best Star Wars series written. Sadly it is abridged, but still worth a credit if you have an extra one. Still, read the paperback first.
PS Audible if you read this, I personally would spend a credit on EVERY single legends book that isn’t unabridged. If you could keep production values as high as this maybe two.

abridging should be banned

no no no no no... Marc Thompson is still a genius... only thing saving these versions

While Luke and Ben try to cope with Mara’s death, Jaina, Jag and Zekk hunt for Alima Rar (the presumed killer of Mara). Alima discovers the Sith nest but is not what she expected. Jacen meanwhile grows weaker in my view - he makes sloppy mistakes, clearly needing still guidance, making silly moves and allowing people to slip his manipulation grip, turning him into the most hated person even by his family and loved ones.. To be honest I found the storyline of Jacen a bit weak and not properly evolved of how he got so drunk on power and arrogant to slip in such a way.
Audio and sound effects is superb.