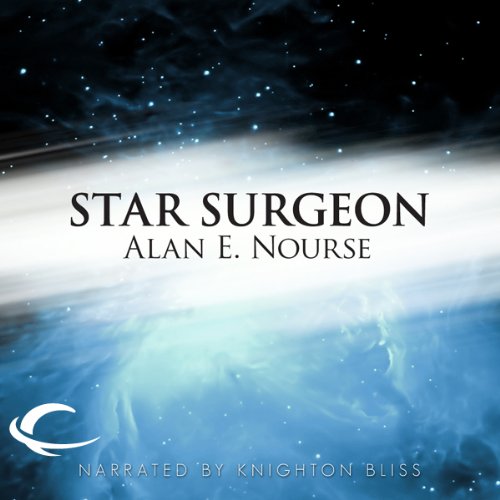 In the grand tradition of Anton Chekhov and William Carlos Williams, Alan E. Nourse was both a writer and a physician. Nourse's literary lens had a much larger aperture than either of these other doctors, however: He wrote science fiction about distant galaxies rather than ruminations on red wheelbarrows. In Star Surgeon (1959), Earth has become Hospital Earth, and resident alien Dr. Dal Timgar must battle the prejudice of his colleagues to earn his surgical stripes. Performing chapters with titles like "The Galactic Pill Peddlers" and "The Incredible People", the voice of Knighton Bliss has the appeal of a slightly nerdy, entertaining young man who delights in the action and jargon of top-notch sci-fi.

These are the adventures of Dal Timgar, born on a planet of a distant star, who attempts to become a qualified physician of Hospital Earth. This exciting science-fiction story is a selection of the Junior Literary Guild.

When Dal Timgar, of all his medical class, was denied assignment to a general practice patrol ship going out from Hospital Earth to serve the medical needs of the Galactic Confederation, it seemed to him that his eight years of study in the great medical center of the galaxy had ended in failure. He had worked hard and stood at the head of his class, but Dal was different from his medical colleagues in one important way. Born on a planet of a distant star, he was the first son of an alien race to attempt to become a qualified physician of Hospital Earth.