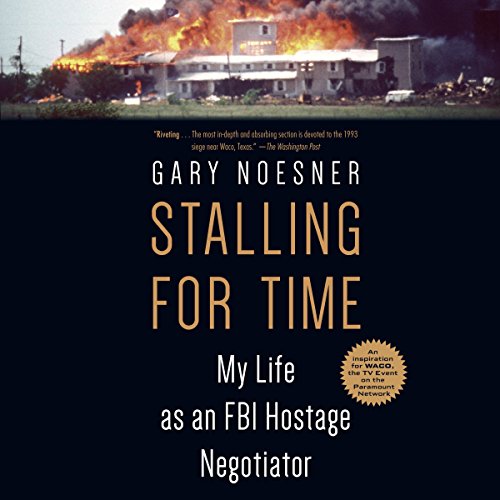 The FBI's chief hostage negotiator recounts harrowing standoffs, including the Waco siege with David Koresh and the Branch Davidians, in a memoir that inspired the miniseries Waco, now on Netflix.

In Stalling for Time, the FBI's chief hostage negotiator takes listeners on a harrowing tour through many of the most famous hostage crises in the history of the modern FBI, including the siege at Waco, the Montana Freemen standoff, and the D.C. sniper attacks. Having helped develop the FBI's nonviolent communication techniques for achieving peaceful outcomes in tense situations, Gary Noesner offers a candid, fascinating look back at his years as an innovator in the ranks of the Bureau and a pioneer on the front lines.

Whether vividly recounting showdowns with the radical Republic of Texas militia or clashes with colleagues and superiors that expose the internal politics of America's premier law enforcement agency, Stalling for Time crackles with insight and breathtaking suspense. Case by case, minute by minute, it's a behind-the-scenes view of a visionary crime fighter in action.

"Riveting…the most in-depth and absorbing section is devoted to the 1993 siege near Waco, Texas." (The Washington Post)

"Certain to fascinate true crime readers...The compelling centerpiece of the book is Noesner's analysis of 'what went wrong at Waco' with the Branch Davidians." (Publishers Weekly)

talk about drinking the Kool-aid!

First, I did like the author/narrator's voice, it was performed well. However, I didn't get through his account of events surrounding the Waco siege.
He kept referring to David Koresh as the "sinful messiah", which I found disrespectful to the dead that innocently believed in Koresh' teachings. After watching the most recent Waco dramatization. and listening to David Thibideau's audiobook, the author continually disparaged, and took cheap shots at the Branch Davidians, even continuing to refer to "Mt. Carmel", as the Davidians called it, as "Ranch Apocalypse".
The issue with the Waco siege was not Koresh' alleged child abuse, but should have been the atrocities/overeach of the FBI, the ATF, and the HRT.
The author seemed to automatically accept the disgruntled former members' account of Koresh' foibles. I'm in no way a fan of David Koresh, nor do I find him innocent, not by a long shot, but the bloodlust of the FBI, after having lost agents in an unwarranted attack on dozens of women and children was all too obvious in the aftermath of the initial attack on the Davidians.
In my opinion, if you want a true account of what happened in Waco, listen to David Thibodeau's book.

Mr. Noesner's narration is second to none. His voice is soothing and consistent. No wonder he had such a successful career as a negotiator.

I had hoped for more details about the negotiation process itself, and I would have liked to have heard about more real world examples. My biggest complaint is that the author sounded a little self-indulgent at times. Overall I would say it was interesting and worth the time.

An incredible glimpse into a life journey that has culminated in a unique skill set and perspective about the necessity of using communication skills to save human lives. Gary has laid out several examples of how these skills, in conjunction with tactical support at times, minimize the loss of life and preserve the dignity of those involved. Some examples underscore how ignoring the importance of maintaining a dialogue with perpetrators have gone sadly awry. Another important theme emerges, that of careful coordination among all responders is paramount. Such a
skill set has implications beyond major events, but is useful in many settings including health care. I applaud Gary for baring his soul, risking the displeasure of colleagues and illustrating the importance of what his life’s work, his passion, has accomplished. Kudos, my friend!

Not what I thought.

I got this book after reading David Thibadeau's book, and watching the series on Netflix. While this book was good, it wasn't what I expected. Very little was about Waco, and I guess I should've expected that. It is about Mr. Noesner's career as a whole, and I had hoped it would've had a focus on Waco. Good book about his exploits as an FBI negotiator.

Each chapter is a vignette of a case Gary played a role in or exemplifies tactics and strategies he seeks to explain in the book.
The book is captivating, entertaining, and is for everyone...all of life can be seen as negotiation.
Having Gary read the book is an added bonus.

many people complained about his perceived lack of addressing the infamous debacles the FBI and ATF have created over time. It's important to remember this was specifically about negotiations and not overall tactics. He pointed to many failures, and called people out by name within his own organization. No organization is perfect, especially not government, they suck at everything they do, but Gary did a fair job of telling HIS story, while also acknowledging that disasters are created by both sides.

I was a bit sad to finish this book It exemplifies what I consider to be honorable law enforcement. In addition to being an exhilarating account of some of the most publicized hostage situations and terrorist standoffs in modern memory it is also the memoir of a man who forever changed the attitude of the FBI. It is not victory or defeat which defines us but rather how we carry ourselves in the face of adversity. I used the tactics and practices of this book to negotiate with myself specifically to convince myself to enter a long term opiod recovery. in addition to being an honor it quite literally helped save my life. -Sam