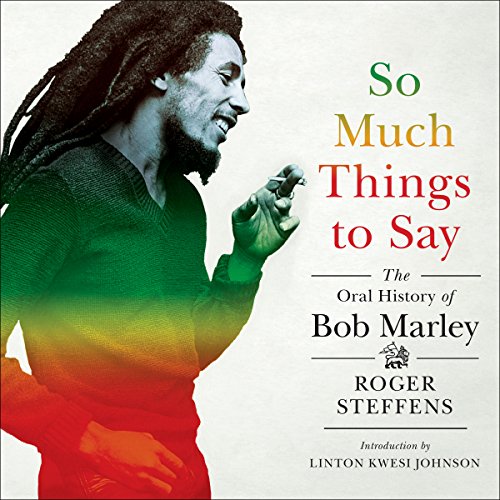 So Much Things to Say

So Much Things to Say

Bob Marley's life is the stuff of legend. Raised in the slums of Kingston, Jamaica, Marley (1945-1981) wrote songs that inspired millions. So Much Things to Say tells Marley's life story like never before. Roger Steffens traveled with the Wailers and interviewed Peter Tosh and Bunny Wailer extensively. Now, drawing on 40 years of intimate interviews with band members, family, lovers, and confidants - many speaking publicly for the first time - Steffens crafts a riveting oral history depicting Marley's life through vivid scenes: the future reggae star auditioning for Coxsone Dodd in Trench Town, the violent confrontation between the Wailers and producer Lee Perry, the attempted assassination (and conspiracy theories that followed), triumphant live performances around the world, and the artist's tragic death from cancer at the age of 36. Revealing and original, So Much Things to Say presents Marley as both man and musician, seen through the eyes of those who knew him best.

I thoroughly enjoyed this book. All of the different accounts from the different people around Bob Marley throughout his life and climb to becoming the Father of Reggae. This book has given me a much deeper appreciation for Bob's music and the impact he had on the world. I found myself several times going back and listening to different songs or albums as the book discussed the accounts that lead to them. This really took me to a new level of respect and adoration. I even took the time to explain to my children the meaning behind the songs and lyrics. My favorite album being Survival but my overall favorite song being War. Compared to today's musicians or even some other historically iconic music artists it's hard for me to compare them to Bob Marley.

Oral history of the life of Bob

this was a good oral history of Bob's life as rold by those closest to him as they remembered it. Great listen for rhose who want an eye whitness account of the hapenings.

Excellent read, especially if you followed the legend. Names and places enabled you to put together things and events you read a

Excellent read. If you follow the life and history of the legend things you read and heard about, the book put everything into place and enable you to understand events and Put together the rumors you heard. Bob is a hero

Great book about Bob's life! Great information about his life and achievements! check it out! One Love

A Rare Glimpse of a Legend.

Roger (Rojah) Stephens, narrations was simply compelling. His storytelling is seamlessly interwoven with a first-hand account by those who knew Bob Marley, as though they themselves were speaking. I was captivated from start to finish. I can't express how important this labor of love is to me as well as the world. A rare and de-mystifying glimpse into the life of a little country boy who would become King of Reggae, King of King's music. Blessed Love to all who lend there support in making this a classic and a timeless treasure.

Roger Steffens is unquestionably the most important mentor to anyone collecting reggae. From the start, he’s been sharing his collection consistently whether it be on the radio, internet, or sending you a tape. That said, his diligent work is reflected brilliantly in this audiobook and offers so much knowledge for everyone, including marley or Wailers experts. Hail up Ras Rojah!! Many many thanks for sharing once more and may Jah bless the bredren and his family..ever faithful and ever sure! Much love, Thundermon

An inspiration, a proper story telling of a benevolent soul ... Bob Marley was a gift to us all , straight from our creator ...