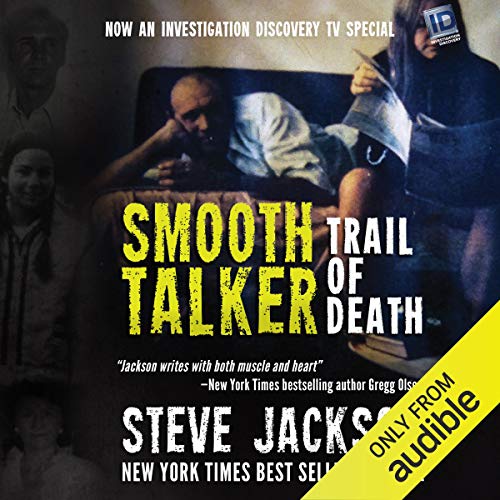 One morning in July 1974, Anita Andrews, the owner and bartender at Fagiani's Cocktail Lounge in Napa, California was found dead in her bar - raped, beaten, and stabbed to death in a bloody frenzy. She'd last been seen alive the night before talking to a drifter who sat at the end of the bar, playing cards and flirting with her. But the stranger, along with Anita's Cadillac, had disappeared. Unable to locate a suspect, police investigators sadly watched the case grow cold over the years.

Meanwhile, a month after Anita's murder, young Michele Wallace was driving down a road in the mountains near Crested Butte, Colorado, when she gave two stranded motorists, Chuck Matthews and a man named Roy, a ride. Dropping Matthews off at a bar in Gunnison, she agreed to take Roy to his truck. She was never seen alive again, nor could a massive search of the mountains locate her remains. The trail leading to her killer also ran into dead-ends.

Fourteen years later, Charlotte Sauerwin, engaged to be married, met a smooth-talking man at a laundromat in Livingston Parish, Louisiana. The next evening, her body was found in the woods; she'd been raped, tortured, and her throat slashed. The police suspected her fiance, Vince LeJeune, though he proclaimed his innocence to anyone who would listen. Meanwhile, the man from the laundromat couldn't be located. The three murders would remain unsolved, eating at the hearts, minds and lives of the women's families, friends and communities.

Then in the early 1990s, a rookie Gunnison County sheriff's investigator named Kathy Young began looking into the Wallace case and identified a suspect named Roy Melanson, a serial rapist from Texas.

Smooth Talker is the story of Melanson, his depredations, and the intrepid police work that went into bringing him to justice.

I thought it was a well researched accoun

If you could sum up Smooth Talker: Trail of Death in three words, what would they be?

Have you listened to any of Kevin Pierce’s other performances before? How does this one compare?

Kevin is like a warm cup of chicken soup on a cool autumn day. He narrated the first audible book I listened to and I've been a fan ever since. I usually read most of the true crime books he narrates. There is something very sincere, and kind in his delivery and I enjoy listening m

If you could give Smooth Talker: Trail of Death a new subtitle, what would it be?

Stranger in the woods.

This book covers 3 different cases perpetrated by the same man, and the work that went in to bringing him to justice. Although it starts out with the bartender victim, I felt that most of the emphasis was placed on the Colorado (the 2nd) victim. The synopsis that accompanied the book when I received it only mentioned the first victim in detail, so I expected that case to receive the most attention.
I found the descriptions of the impact of the killer's actions on the victims friends and family touching, again, especially with the young woman in Colorado.
I remember feeling frustrated that it took so long for justice to catch up to the bad guy, but also a sense of satisfaction as his attempts to paint himself as the victim failed each time it finally did. I also remember feeling certain that there are more crimes he is responsible for that haven't come to light yet, and I wonder if they ever will.
Kevin Pierce does a great job narrating. He is easy to listen to.

I received this audiobook at no cost in exchange for a fair and honest review.

This was interesting but it could have been so much better if there had been more information. I would have liked to know more about the serial killer - what is his personal/family background? Would love to have more information about the victims, similar to the way Jack Olsen told his stories.

Kevin Pierce helps save the day. He is a fantastic performer and makes books even more interesting than they would be if I read them myself. I love his tone of voice, the emotion he puts into the characters and his rhythm. I sign when I hear his voice because I know it is going to be a good listen.

An excellent true story of a serial killer

This books title describes the killer perfectly. The only problem I had with this book was with the author, Steve Jackson. I think with all the witnesses they had he should have been caught much earlier. I did however like this book a lot and would recommend to "True Crime Buffs " . As for the narrator Kevin Pierce is THE narrator for this genre. Great !

There's a Special Place in Hell for Him

This is a true crime nonfiction account of how a serial rapist/murderer was brought to justice. It starts with the gruesome murder of a woman in CA in the 70's and a woman's disappearance a month later in CO, both of which became cold cases for years until a rookie investigator in CO started to put the pieces of the CO case together. The book is like an episode of Forensic Files but more detailed and in-depth. I found it fascinating and couldn't stop listening.

Kevin Pierce does an excellent job of telling the story while also performing the dialogue of the various players in this case. He used the right inflection, emotion and cadence for this type of audiobook. He did a good job with both male and female voices, as well as accents. Since I own that I am extremely picky and honestly can't think of one time I got distracted from the story to notice a narration mistake, this essentially means that his performance was either perfect or damn close to it. He is the perfect narrator for true crime audiobooks.

tale of a cold blooded rapist and killer whose best weapons were a silver tongue and a slick manner. A good read for true crime fans

"This audiobook was provided by the author, narrator, or publisher at no cost in exchange for an unbiased review courtesy of Audiobook B"last."

This true crime drama follows hunt and trial of cold case many years later. DNA use is shown in its development.

The narration was well done.

Kept me glued and drawn in....

If you could sum up Smooth Talker: Trail of Death in three words, what would they be?

What does Kevin Pierce bring to the story that you wouldn’t experience if you just read the book?

Kevin does a great job. I really enjoy his narration, as he draws the reader inside the story like no other.

"I was provided this audiobook at no charge by the narrator in exchange for an unbiased review via Audiobook Boom."

"I was provided this audiobook at no charge by the author, publisher and/or narrator in exchange for an unbiased review via AudiobookBlast dot com."

Nothing new, but sometimes there doesn't need to b

Smooth Talker chronicles the crimes of, hunt for, and subsequent capture of murderer and rapist Roy Melanson. Steve Jackson successfully conveys the senseless nature of crime as a whole, as well as how the lives of each victim's family and friends are irrevocably changed forever. Kevin Pierce is my favorite true crime narrator and doesn't disappoint here, his smooth warm cadence is as pleasant as ever. If you enjoy true crime you know what to expect, and if you are new to the genre Smooth Talker is as good a place to start as any. This audiobook was given by the author, narrator, or publisher at no cost in exchange for an unbiased review via Audiobook Boom.