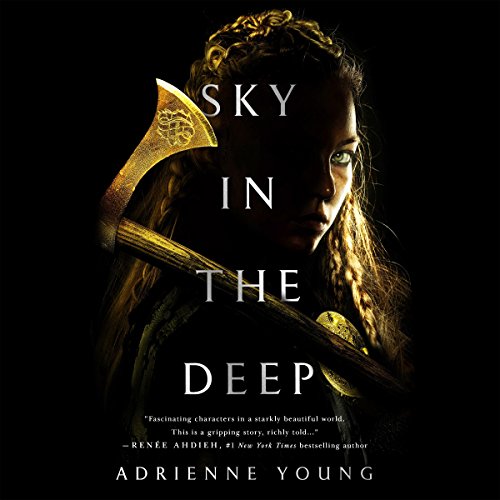 Sky in the Deep

In her highly-anticipated debut audiobook, Adrienne Young brings to life a lush, vivid world that will enchant listeners everywhere. Sky in the Deep is mythic in scope and speaks straight to the heart.

Raised to be a warrior, 17-year-old Eelyn fights alongside her Aska clansmen in an ancient rivalry against the Riki clan. Her life is brutal but simple: train to fight and fight to survive. Until the day she sees the impossible on the battlefield - her brother, fighting with the enemy - the brother she watched die five years ago.

Eelyn loses her focus and is captured. Now, she must survive the winter in the mountains with the Riki, in a village where every neighbor is an enemy, every battle scar possibly one she delivered. But when the Riki village is raided by a ruthless clan settling in the valley, Eelyn is even more desperate to get back to her beloved family.

She is given no choice but to trust Fiske, her brother's friend. They must do the impossible: unite the clans to fight together, or risk being slaughtered one by one. Driven by a love for her clan and her growing love for Fiske, Eelyn must confront her own definition of loyalty and family to find a way to forgive her brother while daring to put her faith in the people she's spent her life hating.

This epic audiobook adventure will transport listeners to a distant time and place, but the characters themselves will seem like old familiar friends.

"Fearless in its exploration of family, forgiveness, loyalty, and love, Sky in the Deep is fierce, vivid, and violently beautiful. This book will wage a war with your heart as brutal and as bold as the battles inked in its pages." (Stephanie Garber, New York Times best-selling author of Caraval)

"Young’s often poetic writing forms a stark juxtaposition with her vivid descriptions of battle and bloodshed, creating a clear picture of the brutality of war." (Publishers Weekly)

"Young’s staccato prose matches her fierce fighters, but the raw emotions and rapid pacing belie a well-honed voice and taut narrative. A rousing saga and moving coming-of-age tale, perfect for those who appreciate the wild and the wildlings, strong female protagonists, and cinematic battles." (Kirkus)

Raw and Brutal With A Lot of Texture and Depth

This. Is so much. Everything. I can’t. I just. I want to find the right words to explain why, or even how this grabbed me by the throat and squeezed until I forgot how to even breathe and no longer even cared that I couldn’t. But I can’t. I’ll try, but I already know I’m going to fail to do it justice.

This YA fantasy, reminiscent of a Viking culture, is one of my favorite reads of 2018 so far, and I’m already 171 books deep and have read some pretty amazing stuff. I currently can’t name any of those other titles, because I only have eyes for Sky in the Deep right now, and as a result, everything else has suddenly paled in comparison.

This is absolutely brutal and stark, but with so much texture and depth and richness of the world that I want to throw away my flip-flops and messy bun for battle armor and braids. The MC is pure wrath and solid conviction, and I love that her level of ferocity and concept of honor is paired with so much raw emotion.

On a worse note, this novel is so incredible that it has completely crippled me with self-doubt, and I’m now floundering with my current writing project. So I both love that it could destroy me like this, and I hate that I allow myself to be made small in comparison. Probably, in a few days, after I pick myself back up off the floor and stop reeling, I’ll try to resolve this crisis of writing faith. For now, I mostly just want to pick this story back up and bury myself deep inside the world again. And then again and again.

As an aside, if you can’t handle blood, gore, battle, and violence, then you will struggle with this book, but I suggest you find a way to handle those things, if at all possible, as there is so much heart you’ll be missing out on if you pass this one up.

Yes. Sky in the Deep is definitely something unique in the YA Fantasy landscape. Intensely character-drive, stark, bleak, and yet the thread of hope is pulled taut throughout the entire narrative.

What other book might you compare Sky in the Deep to and why?

And I Darken by Kiersten White, but less dense and complex, quicker paced, with a touch of fantasy influence.

Which character – as performed by Khristine Hvam – was your favorite?

Eelyn, but she differentiated all the characters well. Never took me out of the story. Excellent performance.

All the interactions between Eelyn and Halvard. Totally disarming.

Sky in the Deep hit me in the feels with its focus on family relationships, both blood family and found family, and in particular the close and complicated sibling relationships. Aaaaagh my favorite!

Lest you think Eelyn is yet another generic Strong Female Character Who Is Not Like Other Girls, please let me clarify: The beautiful thing about this book is its reflection of Viking culture and the role of women. Eelyn is not special because she's a woman warrior. There are lots of women warriors. It's just the way of things. And the men in this book are deeply emotional, too, and not at all afraid to show it. Eelyn is loyal to her core, fierce, proud, loving, and ultimately powerful in a way that has nothing to do with her physical strength.

For me, the saving grace of this book was Khristine Hvam. If I hadn't listened to it, I might never have finished this one. There was so much that left me questioning everything about this. For one, the brother. Five years he spent separated from his family. Which I could get, honestly. It wasn't like they had a mail service, cell phones, or even pigeons to send messages. What I never understood was the circumstances of how brother and sister had their fateful meet. That is what kept me from enjoying this book. It didn't make sense and it was never explained (and I can't explain without giving away spoilers).

I think this might have been better without the brother, Eery (Or is it Eerie? Eary? Ahhh! The only trouble I have with audiobooks!). If she were captured without the pretense of her brother being alive (by all rights, he should be dead), the story could have been so much more without him. I think the soul searching would have meant so much more.

Finally a book where the main character isn’t the chosen one!

I got this book on a whim. It was in every bookstagram post, booktube video, and subscription box. So it had to be good right?
It was so much better then just “good”. I didn’t know what this book would turn into. It always kept me guessing. And like the header said, the main character wasn’t the chosen one and that makes my heart soar.

I struggled to finish this book.
I found the main character quite dull. She kept saying she was strong, bold and amazing, but she doesn't act like it. It is odd to hear/read someone praising themselves for their awesomeness. The storyline was pretty boring. I feel like the romantic relationship between her and the love interest was forced, and came very sudden.

I saw that this book had several really good ratings and I was in the mood for a YA adventure type book so I gave this one a try. The narration was good but the book itself didn't really impress me. It was a bit on the gory side in some places, which didn't really put me off but wasn't a plus for me either. It might bother other readers so I thought I should mention that. I didn't really identify with the characters and feel with/for them the way I usually do in a good book. I just felt like the story wasn't explained well or something. Like, so many things happened kind of all the sudden. Like the romance part of it...I didn't necessarily feel like either person had feelings for each other, but all the sudden things were happening with them. And so many other things that you expect the characters to have to work through, just turn out out okay without anything really happening (with the exception of some battle scenes). I don't know how to explain it... I think it could have been a good story but there just wasn't enough build up or back story or something for me to feel attached to any of the characters. When I finished I just kind of thought, "So that's the story, huh?"

I disliked this book from the first couple of chapters on but given the great rating it had, I held on and listened to the end - I wish I hadn't. What a waste of time. No relatable or even marginally likable or distinguished characters; obvious and predictable plot; redundant descriptions, and just overall a crappy story.

Sky in the deep 3.75⭐️
Two regions are at war and every 5 years there is a battle between the two. This year Eelyn was taken and sold to the enemy. While she is a slave there she finds her brother. Living with them, working with them, he was supposed to be dead. Killed by them but obviously he wasnt and hes aliveand well and didnt have the decency to tell his sister that he was alive and that he decided to join the enemy.
I loved the relationship between Eelyn and the children. She was kind and they cared for her even though she was the enemy and a slave.
She knows she will have to escape and kill anyone that gets in her way including her brother if need be.

I have to admit that the beginning wasn’t interesting and i wanted to put it down. It wasnt that anything was wrong but i didn’t connect with the story or the characters but after the first 50-100 pages i really liked the characters and i will drawn into the story and really liked it. So if you had trouble getting into it, push through because its worth it.

But it was also very basic. Two regions fight against each other. One falls in love with the other, they would die without each other everyelse is shocked at their rebellion love. And everyone ends up happily ever after. Cute to pass the time but very commonly done.

The narrator did an excellent job and she made the story better!!

I LOVED this narration. Although I understand that she does not necessarily sound as young as the protagonist, her performance is one of the best I have heard to date in an audiobook. Beautifully done. This quickly became my favorite book this year.

The narrator was superb and the story was beautiful. I really loved reading the differences between the two clans and their beliefs. Beautiful example of meshing and coming together