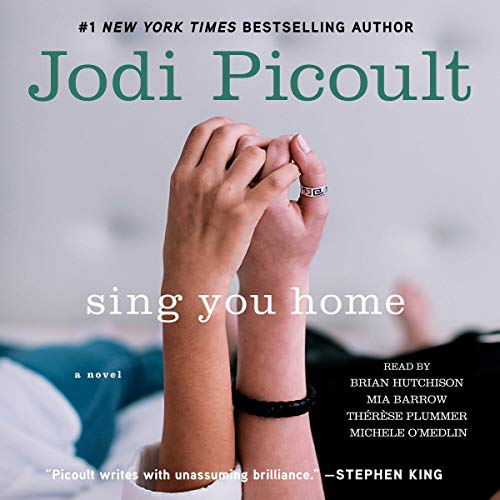 From the award-winning, number one New York Times best-selling author whom USA Today calls a “master of the page-turner” comes the spectacular story of a woman’s complex quest to form a family.

Every life has a soundtrack. All you have to do is listen.

Music has set the tone for most of Zoe Baxter’s life. There’s the melody that reminds her of the summer she spent rubbing baby oil on her stomach in pursuit of the perfect tan. A dance beat that makes her think of using a fake ID to slip into a nightclub. A dirge that marked the years she spent trying to get pregnant.

In the aftermath of a series of personal tragedies, Zoe throws herself into her career as a music therapist. When an unexpected friendship slowly blossoms into love, she makes plans for a new life, but to her shock and inevitable rage, some people - even those she loves and trusts most - don’t want that to happen.

Sing You Home is about identity, love, marriage, and parenthood. It’s about people wanting to do the right thing for the greater good, even as they work to fulfill their own personal desires and dreams. And it’s about what happens when the outside world brutally calls into question the very thing closest to our hearts: family.

The singing ruins it!

If you can get past the terrible singing, which starts as soon as the book begins, then the book is okay. EVERY TIME the singing began I had to fast forward 3 minutes to avoid the terrible sound.

As a whole, I found the topics explored by the book interesting, and raised a lot of good questions. Also, the narrators made the story come alive and were pleasant to listen to. It was refreshing to be served an LGBT novel that wasn't all about sex or stereotypes, but I found it a little too flat, and the immense focus on the Bible, God and religion, even though I get why she's doing it, was a little off-putting for me personally. Still, it was an interesting story with a theme that's worthy of attention.

I've liked other books from this author. wasn't crazy about this one though. I though it started strong but dragged along and had a bit of an abrupt and weak ending. And Lucy, the character we encounter over and over, remains a mystery.

This book had me bawling, multiple times. Suffering with infertility and loss, bringing such real emotions to the surface. The story is tragic, and beautiful. Worth the read!!

Jodi is one of my favorite authors and I lived the story line but getting through the songs was just painful. she's definitely not a songwriter. but, I still would recommend this book. just fast forward the songs.

For the most part, I enjoy reading this author's work. She has a depth in her novels in relation to social norms and policies that touches on controversial topics. This author is direct, firm and diplomatic within the creation of her characters and creates a solid plot to keep the readers interest.

I enjoyed the complexity of the relationships for the most part. At times, the drama components of her characters life situations kicks up a bit more than I feel is necessary but it is entertaining.

Narration method is adequate. I usually enjoy one narrator and this one has multiple narrators. It was not problematic, just added the drama piece.

I cdn’t put this book down; was an all night read two nights In a row. I love the way JP presents both sides of a controversial issue in her novels. This book is worth an immediate re-read. Unlike some critics’ censures of the singing portions, I found the singing courageous and reminiscent of Karaoke performances. I have a professional songwriter-singer granddaughter, Miriam McQueen, who has songs and videos on YouTube. Her brother, John S. McQueen, is her videographer. I could picture her doing these songs for this book. Hoping and praying for real Judeao-Christian love to win out in the end, without judgmentalism, I was so excited to hear the final ending I highly recommend this book for anyone with straight and gay people in their family, educators, parents with children in the public school system, and high school students. Just an outstanding JP novel with JP doing her research homework for which she is so famous. She’s one of the pioneer educator-writers of the 21st century. Thank you for teaching a retired teacher like me, Bachelor Master Doctor Jodi Picoult. I’d be honored to meet you someday. You give civilization such a moving chronicle of current historical issues.

I was hooked in the very beginning. I thought for sure I knew what would happen in the end, but several twists have me back and forth, changing my mind.

I have read all of Jodi’s books and believe this love story will open the minds and hearts of many who can hear. WORDS FROM THE HEART ...REALLY DO REACH THE HEART ❤️

Faces some of the tough questions that so many people struggle with daily.
Picoult has written another thought provoking story.

and love wins. A breathtaking story about a woman haveing her comeing-out at the age of 41 with lots of detailed thinking-mechanisms of "bible-true" evangelicals.