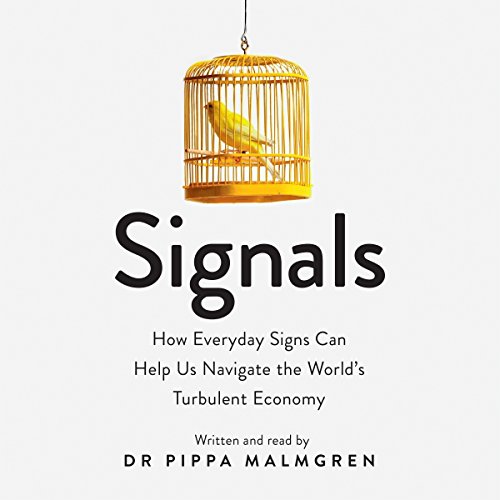 Signals is the story of the world economy, told in the language of everyday objects, places and events - from magazine covers and supermarkets to public protests.

Pippa Malmgren argues that by being alert to the many signals around us, we can be empowered to deal with the varied troubles and treasures the world economy inevitably brings.

Economics is not just maths and data. Perfume and makeup are part of the world economy, too. Signals will help you understand why the size of chocolate bars, steaks and apartments are shrinking. It explains why the government says we face deflation, yet everyone feels their cost of living is rising and their standard of living is falling. Rising protein prices are felt not just during your weekly shop but by the leaders of emerging markets who are obliged to reach for food and energy assets to feed their people. The increasing near misses between America's spy planes and the fighter jets of China and Russia are no coincidence.

Malmgren reveals how our daily lives are affected by the ongoing battle, created by central bankers, between inflation and deflation. The fallout of this battle is evident in the rise of antiestablishment voting, the return of social unrest to emerging markets, the movement of manufacturing jobs back to the West and pressure from mass immigration.

Economic forces are breaking the social contract between citizens and their states. If the only real solution is innovation, then the key question becomes whether governments are hostile or hospitable to efforts to build tomorrow's economy today.

Malmgren shows us who is already building the future and how to be part of it. With its wonderful range of examples, from a Vogue magazine cover to a protest by a Tibetan monk, Signals demonstrates that although we can't predict the future of the world economy, we can better prepare ourselves for it.

Far from being the concern of only a privileged few, Malmgren shows that economics is a hot topic that touches every life.

An Annoying Must Read

A very important insight is padded with superfluous libertarian ideology meaning the reader has to work to get the benefit of Malmgren's discovery.

Would you recommend Signals to your friends? Why or why not?

Yes. The ideas contained are valuable for successful forcasting

Did Signals inspire you to do anything?

Take an interest in the seemingly small things that, while outwardly insignificant, combine to make life more interesting.

An eye opening listen. Good narration by the author. If you are not very familiar with economic influences on geopolitics, or on the various ways governments can tax you other than taxation, you will walk away wiser. Made me rethink some preconceived notions. Who knew economics could be so fascinating?

Written and read by the signal maven herself!

I absolutely admire Pippa, and this book definitely did not disappoint! Must read for anyone, especially anyone who enjoys macro.

Loved it, well narrated and content is top notch. pippa hit the nails on the head like a roofer hammering away on his roof tiles.

The story of our nowadays economic problems are well told and explained. The books gives you an overview of our current situation but never saw the signal that would have ignited me.

Solid recap of all things global economics, Fringework as the leading innovative space, and tips/examples of how to identify signals from noise. Great read!

The author did a superb job of breaking down a challenging subject into relatable terms. I have listened to a lot of books on economics and George-politics and found this one very useful in my every day life. There are signals everywhere, we just have to recognize them when we stumble onto them.

Have a lot of name dropping without detail analysis. Complete waste of time if you have some finance knowledge already.
Book returned.

What disappointed you about Signals?

Would you be willing to try another one of Pippa Malmgren’s performances?

What character would you cut from Signals?

it's non fiction?! there are no characters, save perhaps the author