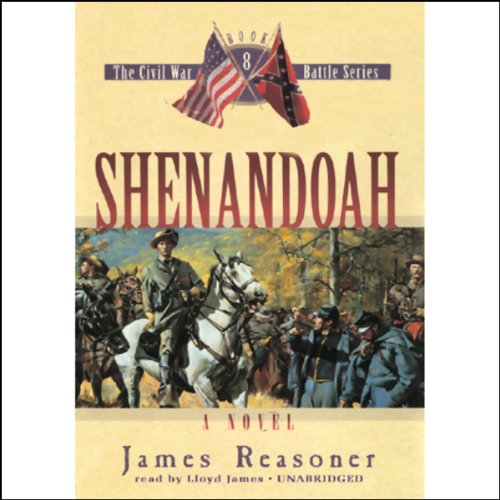 Shenandoah is the eighth book in a series of historical novels spanning the Civil War and describing its effects on one Southern family.

The last half of 1863 has taken a toll on the Brannon family, but a Christmas lull in the fighting brings home Mac and Will as well as Titus, the son believed to have been killed in the war. Though his return is joyous news, Titus is devastated when he finds his wife remarried and pregnant. In his bitterness, he unleashes a personal war on the new family.

Will returns to duty and is swept into the fighting in the wilderness. For a time, Mac is with him, but a Federal raid near Richmond propels the Confederate cavalry toward the crossroads at Yellow Tavern, and towards destiny. Of the two brothers left at the Brannon farm, now behind enemy lines, one seeks vengeance on the Yankees fighting in the Shenandoah Valley.

Find out what happens to the Brannon family in the rest of the Civil War Battle Series.
©2002 James Reasoner (P)2005 Blackstone Audiobooks

A Tale of Two parts

This is now the 8th book of the series I have listened to and the author continues to produce a very good series with some unpredictable surprises!
But in this book - it really is in two parts.
Part One of the download I rated a "3" because it is really a mystery (I'll leave it at that)that takes place with the Brannons - told in civil war times but not having anything really to do with the war.
Part Two is a "5"! Wonderful description of the battles of the Wilderness and other aspects of the 40 Days battles between Grant and Lee, ending in this case with Cold Harbor.
And a very interesting section with one brother at the end, riding with Mosby's rangers - and some discussion of this very controversial southern officer.

A breather before the finale

This was of all the books so far in the series the most disappointing - it focused almost entirely on the Brannan family and their troubles and hardly at all on the battles or the coming climax of the Civil War.

That said those battles that were described were as always masterly vivid - this is James Reasoner's forte, painting the battle scenes with such tight descriptions that you can see the fighting in your minds eye. Its graphic but not gratuitous in its rawness. It also brings home the unbelievable waste that is war - its humbling and saddening stuff.

Lloyd James as he has for the other 7 books did a fantastic job narrating the book and the producers were back on the ball and there were no glitches in production in this reading.

Only two more books left and I have downloaded both ready for the final acts of the war and the dramas of the Brannan family. I can already sense that when I finish this series there is going to be a bit of a hole in my life!