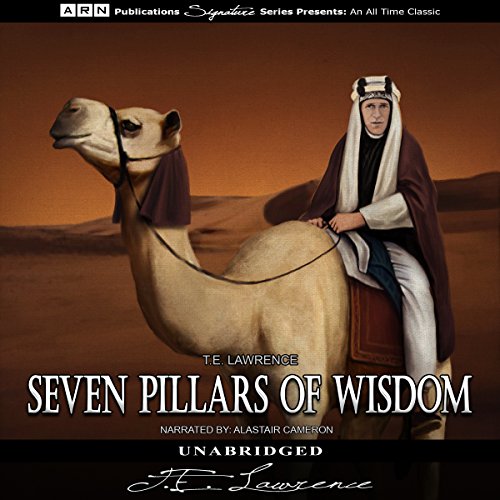 Seven Pillars of Wisdom is the autobiographical account of T. E. Lawrence's role in the Arab Revolt against the Turkish Empire. The book is mostly set in the deserts of Arabia with a great deal of time spent marching through them with camels and the telling of the events through Lawrence's eyes. Lawrence, educated at Oxford, began by working for a museum on an archaeological dig in the Middle East at the onset of World War I, after which he was commissioned into the British Army where is granted many military distinctions and special recognition for his achievements during the war years.

After the war, the extraordinary and gifted man serves as an Arab consultant at peace conferences and as a political adviser to the colonial office of his government.

...to listen to. Reader is surely well-intentioned but his rhythm ia literally painful.too bad really.

Impossible to listen to the narrator

I was looking forward to listening to this audiobook and was utterly disappointed. It was mostly due to the narrator's reading cadence and tone which made it impossible for me to engage. Also, turns out that T.E. Lawrence had a very round about way of getting his point across in writing which demands attention to every word to understand what he is trying to say. These two things, when combined were the perfect storm.

A fascinating, thoughtful view of unconventional warfare from one of the legends of the field.

I did not care for the narrator. I found his voice and inflection hard to listen to.

Shamefull presentation of a masterpiece

All I can figure is that this production goal was to mock a great work and the great work. Shame. BTW there is a superb version available also on Audible

Eh... reader was hard to listen too.

Would you try another book from T.E. Lawrence and/or Alastair Cameron?

The performance was monotone. Very hard to listen too. I was excited to hear this classic but had to turn it off after becoming lost in an uninterested daze.

It was fascinating listening to this historical figure tackle the same issues in the middle east our modern day soldiers face.

wish i didn't waste my free book on this