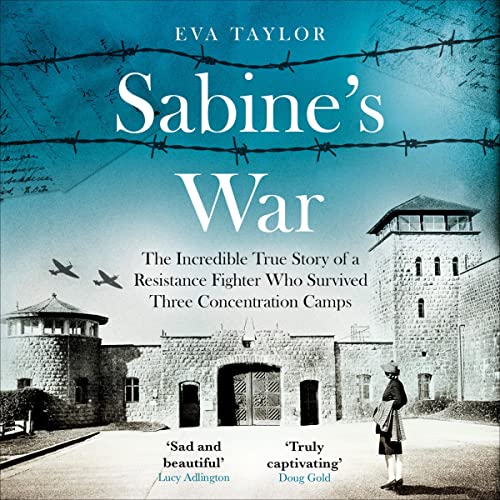 An astonishing tale of romance, resistance and bravery.

Sabine’s War is the previously untold story of a remarkable resistance fighter and her incredible story of survival against the odds.

When Germany invaded Holland in May 1940, Sabine Zuur joined the resistance movement without a moment’s hesitation aged just 22. Helping to hide those avoiding the German authorities, she was soon betrayed and subjected to repeated violent interrogations. Many of her friends were executed, but Sabine was instead sent to the Mauthausen concentration camp, via the Amersfoort and Ravensbrück camps. Enduring gruelling conditions and backbreaking forced manual labour, she survived through a combination of guile and good fortune.

But it was only after Sabine’s death that her daughter Eva discovered an archive of letters detailing her extraordinary life, revealing a rich inner world and a past she had discussed little. Amongst them were declarations of love from pilot Taro, shot down in his Spitfire over northern France aged just 26; notes from Sabine’s second love, Gerard, executed by the Germans; letters to her mother smuggled out in her prison laundry and passionate, creepy missives from a German professional criminal named Gebele who would ultimately save Sabine’s life. She emerges from this correspondence as a woman with an indefinable aura, somehow in control of her own destiny even when to all intents and purposes she was not.

A transfixing story of survival, Sabine’s War captures a remarkable life in the words of the young woman who lived it.

"A sad and beautiful book, shining a light on quiet heroism in dark times." (Lucy Adlington, New York Times best-selling author of The Dressmakers of Auschwitz)

"Truly captivating.... A compelling read that will appeal to anyone who has an in interest in true WWII stories." (Doug Gold, internationally best-selling author of The Note Through the Wire)

"Acutely perceptive.... Sabine’s War is an important contribution to the work of bearing witness." (Gwen Strauss, award-winning author of The Nine: The True Story of a Band of Women Who Survived the Worst of Nazi Germany)