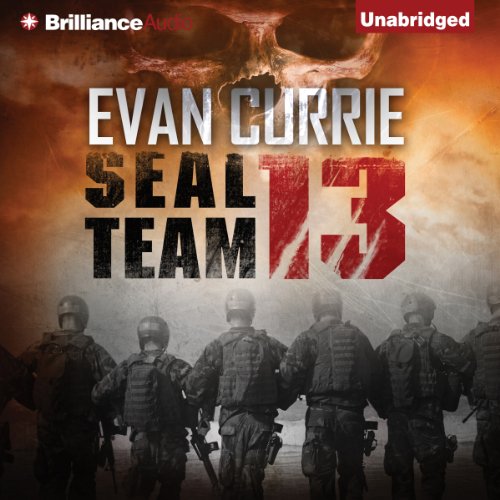 It’s been ten years since a mysterious, horrific incident in the South China Sea annihilated a US Navy destroyer and its Navy SEAL team. Only one man survived. Now, the US Navy is determined to put a stop to the new, frightening incidents taking place with alarming frequency.

Enter SEAL Team 13, an elite group of soldiers led by sole survivor Harold “Hawk” Masters. Everyone on the team has survived contact with supernatural forces from “the other side.” Will their camaraderie and duty to country be enough to defeat the malevolent undead forces threatening the country?

From world-building author Evan Currie, SEAL Team 13 is a dark, riveting, and action-packed tale of military intrigue and supernatural horror.

This Quickly Turned into My Favorite Book in Genre

What made the experience of listening to SEAL Team 13 the most enjoyable?

I LOVED SEAL Team 13 by Evan Currie. This led me to read all four of his Sci-Fi series. It also brought me to SEAL Team 666 & its sequel, Age of Blood; but I’m Jonesin' for the next SEAL Team 13 Novel! None of the rest does it for me like this Hit! Chock full of our .50 Caliber, Beowulf M4 wielding, ST 13 Favorites, taking the heads off of every Supernatural BG in sight per single trigger pull! This would make many of my friends and me big time buyers of SEAL Team 13 - Part 2! I'm already on my 3rd listen through! Can anyone tell me if a sequel is in the works?

Being Dyslexic as a Philosophy & Pre-Med Major at U.C. Berkeley - Cal. And an MBA from Haas there as well, I had to push through 10-15 heavy books a week for 7 years. In order for me to ingest all that info properly enough to maintain a 3.72 GPA there all the way through Graduate School, I had to read each paragraph 3 times before moving on to the next. Audible lets me close my eyes and just listen to all of my favorite, and new favorite, books. It is, for me, like sitting 'round the Campfire, with the sky full of stars, while listening to my dearly departed Grandpa tell me each story. It is amazing! I did not pick up one solitary book to read since I Graduated in 1999, and now that I discovered Audiobooks in February of this year, I have enjoyed well over 50 Novels, with a huge amount to go. Thank You!

What did you love best about SEAL Team 13?

--The characters and dialogue.

This is not your typical SEAL story. There is no training to prepare for this kind of mission. All those stories about the evil things that they go bump in the night---they are true. The gov doesn't want to believe it but with the incidences becoming more frequent they had to do something. This is where TEAM 13 cbomes in. If you like horror, action this one will sure do it for you.

enjoyed this story quite a lot

Told ya he was getting better! ;)

I said early on that Evan Currie was going to get better with each book, and he hasn't disappointed me yet!

Aside from the books he's turning out at a pretty steady pace, I really like a lot of things about the Author "personally" (I don't know him personally, I just know what I've SEEN that he's DONE)... He doesn't just 'write about' "Perseverance" and "Courage" and the usual things; He displays those qualities himself! The First book I read by Currie was "Into The Black", which he'd originally Self-Published. As I said while reviewing that book, "Some people have a story inside them that they believe will connect with readers, if only they can get that story in front of the intended audience. For a new author, getting a book published the traditional way is very often a lesson in 'Why you can't', punctuated by stumbling blocks that seem almost designed to say 'give it up, you don't believe in it enough'". It takes a LOT of Perseverance, Courage, and belief in YOURSELF and your own abilities, to 'push on through' when 'the experts' are telling you, "you can't". I LOVE seeing people turn 'You Can't' into 'THEY DID!' That's the same mix of qualities that you HAVE to have to go far in the Military, "Push On Through!", which is one of the things that shines through in Currie's Military Sci-Fi Books!

At first, "Seal Team 13" felt like a sudden sharp left turn away from the other books I've listened to by Currie, but in a great way! Looking back, it's not really such a hard sharp turn, Currie seems to love writing Military Sci-Fi (Which I just happen to love reading, so it works out well ;) but Currie's past works had a "Space Based Theme" to them early on... This book doesn't go "Into Space", instead it goes "Across the Veil", which was the good twist that made me feel like he'd suddenly made a turn from his earlier works...

Currie also has this knack of introducing "New Tech" in such a way that you don't realize it's "New Tech" and that it doesn't really exist, until later on after you kinda reflect on the book... Then I kinda slapped myself on the forehead, said "Duh", and thought, "I have GOT to get away from my Work-Bench more often" ... As a side note, If I DID 'get away from my work-bench more often', that would be about the time my wife would gleefully whip out her video of me 'Riding Fence' on one of our horses, with a CAD program open on my Palm-Top Computer, designing a new circuit that suddenly hit me... so let's just not go there ;)

Currie kinda "Slips the new stuff in on you" WITHOUT screaming "This is NEW STUFF that *I* thought up" the way many authors do... Nope, he just slips something in, and you don't even realize it doesn't exist... It may be the cool way he has of not trying to "Teach you how to build one yourself", instead he just writes about it like, "Yawn... this is common as dirt, EVERYBODY has one" as the character whips it out and uses it... 5 minutes LATER, your brain catches up and you think, "A WHAT? Wait a Minute...."

I also liked the Narration by Todd Haberkorn a LOT more! The "Odyssey One" Series, was a bit hard to listen to at first, and I kept thinking "But the writing seems to be good, maybe it's the Narration that's pulling the experience down for me".. Then in the last book of that series, the Narration switched to David deVries, and the book came alive! Usually swapping Narrators in the middle of a series is a recipe for disaster from fans, but I noticed his book ratings suddenly seemed to go WAY up, and *I* thought it was a great choice (not that what *I* think means much, until it's time to pay the bills ;)! So I think Mr. Haberkorn is going to the same amazing job of Narration, and "bringing the Characters to life", as deVries brought to the Odyssey One Series! I mean, there HAS to be another book here! Currie closed the book down, but he left the story line wide open for MORE!

I don't like the story. narrator did a good job. it was definitely ok book.

I have read most of Evan Currie's books.I enjoyed this book so much I read it in one day. Starrider52

Wow what a fun ride.
Hopefully more to follow!
A fresh spin on a sometimes over written topic.
Let's go again.

Good storyline. Just lack of Realism from military culture and tactics. There’s nothing in this book that really makes the main characters stand out as Navy SEALs.

I can't wait until the next, but I doubt it will happen. Still, it would be a great series to read.

Good beginning to a new series

I hope there’s more to come, I really want to see what else the team gets into! I’m a big fan of Evans work so if you haven’t done so an you like space battles then I recommend In to the Black! Todd Haberkorn does a great job as always.