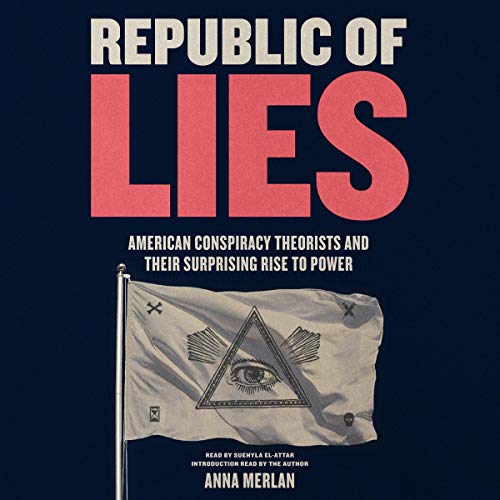 A riveting tour through the landscape and meaning of modern conspiracy theories, exploring the causes and tenacity of this American malady, from birthers to Pizzagate and beyond.

American society has always been fertile ground for conspiracy theories, but with the election of Donald Trump, previously outlandish ideas suddenly attained legitimacy. Trump himself is a conspiracy enthusiast: from his claim that global warming is a Chinese hoax to the accusations of “fake news”, he has fanned the flames of suspicion.

But it was not by the power of one man alone that these ideas gained new power. Republic of Lies looks beyond the caricatures of conspiracy theorists to explain their tenacity. Without lending the theories validity, Anna Merlan gives a nuanced, sympathetic account of the people behind them, across the political spectrum, and the circumstances that helped them take hold. The lack of a social safety net, inadequate education, bitter culture wars, and years of economic insecurity have created large groups of people who feel forgotten by their government and even besieged by it.

Our contemporary conditions are a perfect petri dish for conspiracy movements: a durable, permanent, elastic climate of alienation and resentment. All the while, an army of politicians and conspiracy peddlers has fanned the flames of suspicion to serve their own ends.

This book is a public service

So much in this book is upsetting-- to cite just one example: the parents of children killed in Sandy Hook being taunted in public by conspiracy nuts who shout that the dead children in question _never existed in the first place_, and if they did then why won't the parents exhume the bodies-- but Merlan keeps the pace humming, carrying you briskly through all the darkness in this heroically researched survey of present day conspiracy thinking-- how we got here and the effect it's having on our political and social lives. It's not all depressing-- some of the UFO stuff is kind of fun. But even those conspiracy theories, as most seem to, lead back to antisemitism and racism.

It feels like required reading right now. And Merlan put on her pith helmet and waded through a lot of grotesque stuff to bring us this dispatch. Respect. Recognize. Read.

This is a must listen for everyone as we work to put the last 4 years of lies and corruption behind us. We must understand American fantasy and American’s susceptibility to believe anything due to the stressors of unfulfilled promises from the sovereign state. With prosperity for all comes truth and rigorous honesty, unlike the conspiracies and lies that have festered under the kakistocracy of a reality TV goon and his family.

Thank you Anna, this book is an incredible deep dive and explanation of how we got to inflection and insurrection point.

Must-read for citizens of western democracy

Merlan is a serious writer, and she’s gutsy, she got right in the middle of these people and their conventions. And if you listen to Audiobooks to fall asleep like I do, her voice is perfect for it, it’s even-toned.

Anna Merlan’s book Republic of Lies is a well written, even-handed, and thought-provoking look at the cause and effects of conspiracy theories. Being perhaps the most recognized victim of one of the most prolific conspiracy theories, Sandy Hook, it can be easy to focus on the horrible results of hoaxer’s beliefs, which have included stalking, harassment, and death threats. While acknowledging the tremendous damage that conspiracy theory causes and the threat to both private citizens like myself and to the community and even democracy as a whole, Merlan peels back the layers of circumstances that create conspiracy theories and discusses why they happen and how easily they can consume people. This book is an important read for anyone interested in understanding what is quite possibly the greatest threat to society; disinformation, misinformation, and the monetization of lies.

An empathetic dive into dark corners

This is a deep dive into the sub-culture(s) of modern American conspiracy theories. But rather than laughing at believers’ strange ideas or focusing on the irredeemable villains of the community, Merlan is empathetic as she explains how so many people became so lost. Reminded me a bit of Jon Ronson’s books. Her thoughts in the epilogue, on how tech companies and journalists should operate in the world she describes, could be her next book!

Anna’s research is thorough, she treats her subjects and readers with respect, her sense of humor is wry. I loved this book and listened to it in one sitting.

We’ll read important examination of of a current social issue impacting our democracy. A necessary topic.

Very informative and wonderfully written. Performance was top notch. Hope to get more from Anna

One of the best books ever. Read it. Deep dive into conspiracy theorists and our post truth society. And yes it’s anti Trump so if you like him, skip it. 3/4 oh America is in this camp(anti Trump or indifferent). I’m pretty sure our brains are wired differently so I will just accept it. This book helped me do that

A very well researched and written book. There are far too many books on this topic that tend to be overly hysteric. This is certainly not one of them. I found it profoundly insightful and we'll balanced.