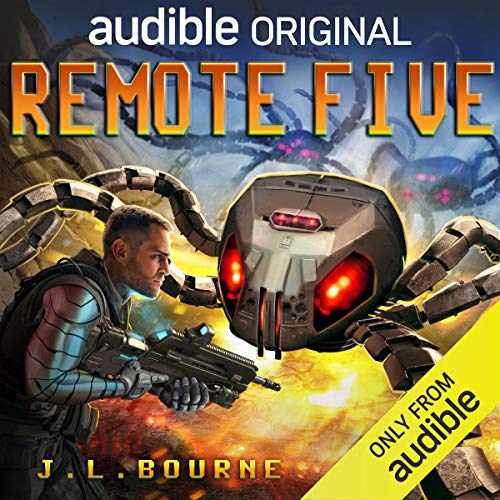 The machines collapsed society with blinding speed, hunting mankind to the edge of extinction. Yet Junior, a young robotics expert, has managed to survive on his island in the Pacific Northwest. He's leveraged his extensive combat experience to learn even more about the tireless enemies that stalk him. He's ready to escalate the battle - and now he and the hardened soldier Brick have allies.

After the fall of the Pentagon and its secondary facility at Mount Weather, a small team managed to escape on an aging gunship to Junior’s island. Their expertise is vital - Dr. Harper Shin wrote the book on robiomechanics, and the two commandos accompanying her are armed to the teeth with the latest military technology.

They'll need all the firepower they can muster, because the machines have altered their tactics to finish what they started. But even if the survivors can stand strong and win the day - will victory be worth the price?

Knocked this one out of the park!

What a ride! J.L. Did it again! Performance: 5/5 Entertaining from start to finish! Love hearing Jay Snider back again! I wasn't a huge fan of Junior's actor at first, coming from the first book. This one I really enjoyed every second of his acting. Great performance overall from everyone involved with this book! Story: 5/5 Ohhh man, where to start. So I decided to listen to this on my 20 minute trip to work, and 20 minute trip home from work 5 days a week. Figuring it would keep me interested in the story and I could savor every minute. Using it to wake up in the morning and to unwind at the end of the day. Always leave them wanting more, right? Well, I spent the last couple days putting in at LEAST an hour of listening. Cleaning around the house, playing games, the usual. This is a great continuation of Trilobye and I'm looking forward to a 3rd book if that's in the cards. If not, the ending was still incredible! There were some really incredible parts to this book that had me driving home with my mouth wide open in anticipation of what would happen next! It's hard to really talk about the book without spoiling anything, so we'll just leave it there. If you liked the first book/audiobook, pick this up and you will not regret it!

Another sold book from J.L. Bourne Check it out you will definitely not regret it.

Wow, looking forward to the next book!

Trilobyte does not disappoint. The adventure continues, machines known and unknown fills this journey. Voice actor's are wonderful and have this magic of bringing their characters to life. Jay Snyder does not disappoint and Chris Andrew Ciulla has become a favorite whom I'll be looking out for. The world has become a more dangerous place since book 1, (you have no idea), as the story continues an usual alliance has occurred and story leading to a jaw dropping event befalling the reader (listener). Do not hesitate, if you read or listened to the first Trilobite, then hit the purchase button and get ready for another surprise!

JL Bourne does it again!

This book continues the story from Trilobyte and it is Fantastic! Do not hesitate. Buy this book now. Mr. Bourne keep up the great work I can’t wait for your next one!

when/what is next?have read or listened to the whole catalog. looking forward to what is next

This book is fantastic. The multiple characters work great together in the story telling. I have yet to not enjoy a single JL Bourne book. I can’t recommend his books enough.

J.L. Bourne writes another great story. Nonstop action, If you have read any of his previous books what are you waiting for. Fatty needs a prequel.

Another solid read by JL Bourne

I enjoyed this follow up to Trilobyte. Certainly leaves room for the possibility of a third book. Regardless i hope JL keeps churning out the books!

Another home run for JL Bourne

Well I'm disappointed it was over so fast. the story was phenomenal and so was the voice acting. I am thrilled with how it turned out and honestly hope for a third book. you know to really drove home the link between this book and the dbda series

Binged it and now craving for more.

I'm a big fan of the works of J.L. Bourne. I really liked the Armageddon series and the Tomorrow War books, but Trilobyte 2 really kept me at the phone, binging it in just a few sessions, listening to the voices of Audible's finest including my absolute favorite, Jay Snyder. Being a wee bit tech nerdy myself as well as into guns, gear and a lot of the other stuff provided by Mr. Bourne, I loved the story of this sequel and the way everything developed and I really hope that number 3 is already in the making while I find some substitute satisfaction here on Audible during the wait.