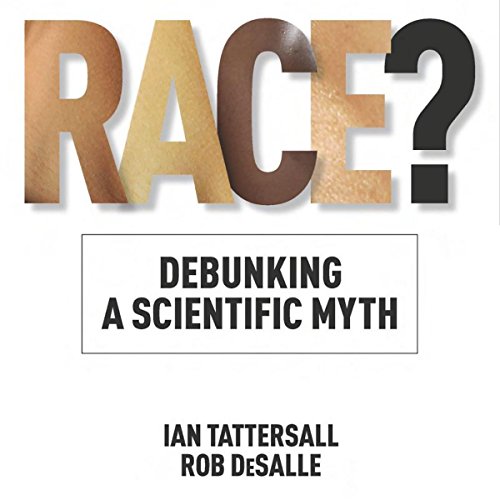 Race has provided the rationale and excuse for some of the worst atrocities in human history. Yet, according to many biologists, physical anthropologists, and geneticists, there is no valid scientific justification for the concept of race. To be more precise, although there is clearly some physical basis for the variations that underlie perceptions of race, clear boundaries among "races" remain highly elusive from a purely biological standpoint. Differences among human populations that people intuitively view as "racial" are not only superficial but are also of astonishingly recent origin.

In this intriguing and highly accessible audiobook, physical anthropologist Ian Tattersall and geneticist Rob DeSalle, both senior scholars from the American Museum of Natural History, explain what human races actually are - and are not - and place them within the wider perspective of natural diversity. They explain that the relative isolation of local populations of the newly evolved human species during the last Ice Age - when Homo sapiens was spreading across the world from an African point of origin - has now begun to reverse itself, as differentiated human populations come back into contact and interbreed.

The book is published by Texas A&M University Press.

Ian does greet work and I like his books. This was a bit of a disappointment. Too much time leading up to his thesis and the thesis focused too much on disease. Could have been a much more interesting book. Having said that, was still useful.

This book attempted to debunk the notion that human races exist. It would have been more accurately named: Species? Debunking a Scientific Myth that Human's Represent Different Species. No one doubts that humans comprise one reproducible species: sapiens. Based on their title, though, I expected the authors to argue effectively why the term race is inaccurate. They never did, only preaching that by defining humans by race opens a door to comparisons of differences, which in turn can lead to conflicts and atrocities. No new insights were offered. The title is misleading. The 11 hours and 55 minutes wasted.