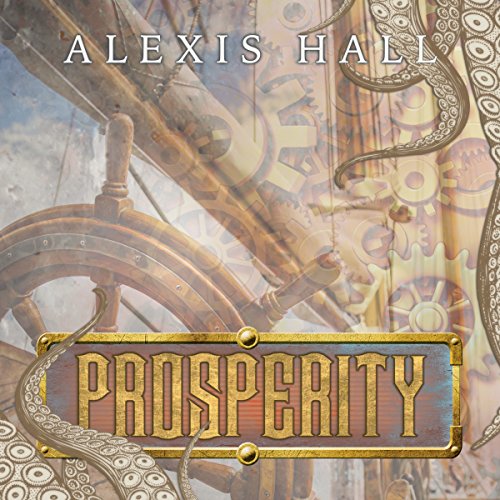 M'lady's name is Shadowless, cos she's the fastest ship in the sky. And she ain't no everyday airship, she's an aethership, meaning she don't need engines nor turbines nor nowt but an aethermancer and the stars t' guide her.

When luckless Dil falls half-dead onto the deck of the skyship Shadowless, he joins an outlaw crew haunted by visions of maelstrom. Driven by a ruthless captain, guided by a pilot with madness in her eyes, they hunt the power that holds up the clouds. Until it turns - to hunt them.

Good, but not great

A lovely, but not-quite-satisfying story. The language can take a little while to catch on to, but creates a unique and endearing voice for the main character.

While the characters are all intriguing, and mostly very easy to lobe, the story never quite seems to find its footing. It stands at a somewhat muddled intersection of adventure and romance with a Lovecraftian/steampunk backdrop, never entirely sure what it wants to be. By the time you reach the climax, it feels like a main story arc is just beginning.

Still, a solid 3.5 so long as you love a queer, character-focused story. My greatest complaint is how little the ending does to satisfy. If you've connected with the characters, you'll find yourself immediately wanting more, and not necessarily in a good way.

As far as narration goes, Boulton knocks it out of the park, as always. He's become a huge selling point on audio books for me with good reason.

This was made for audio.

If a book could be said to be written for audio this would be that book. Alexis Hall is a master of language, and often incorporates dialects into his books, but his use of Cant in this book, and series, takes it to a different level.

Read this book because it, like all of his books, is beautiful, and so well-written that I am amazed at his talent and skill.

Listen to this book because the true magic of his words can be fully appreciated when heard spoken by the outstanding narrator.

Completely, and without any reservation, recommended.

A fun and dramatic steampunk story

This steampunk adventure features a diverse cast of characters and has excellent narration. Highly recommended!

Prosperity was wonderful reading, but being able to hear Dil underscored how crucial voices were to characterization in the story
Boulton's voice is magic

This was one of the most fun audio books I’ve listened to in a awhile. Bolton’s voice, characters and performance brings all of the players to brilliant life. I loved it and am quite sad that the next 2 books in this universe are out as audio books. Be aware- adult themes and language.