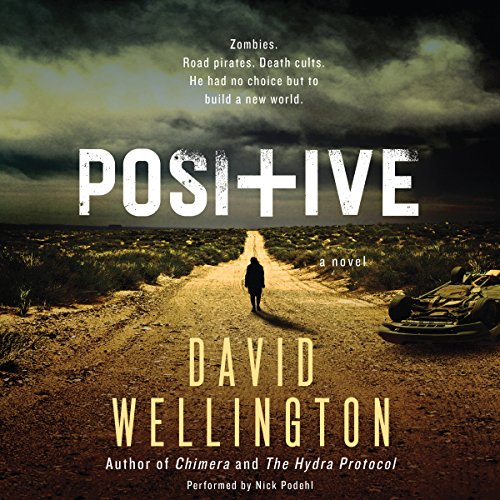 In the best-selling vein of Guillermo Del Toro and Justin Cronin, the acclaimed author of Chimera and The Hydra Protocol delivers his spectacular breakout novel - an entertaining pause-resisting zombie epic that is sure to become a classic.

Anyone can be positive....

The tattooed plus sign on Finnegan's hand marks him as a Positive. At any time the zombie virus could explode in his body, turning him from a rational human into a ravenous monster. His only chance of a normal life is to survive the last two years of the potential incubation period. If he reaches his 21st birthday without an incident, he'll be cleared.

Until then Finn must go to a special facility for positives, segregated from society to keep the healthy population safe. But when the military caravan transporting him is attacked, Finn becomes separated. To make it to safety, he must embark on a perilous cross-country journey across an America transformed - a dark and dangerous land populated with heroes, villains, madmen, and hordes of zombies. And though the zombies are everywhere, Finn discovers that the real danger may be his fellow humans.

Mad Max Beyond Thunderdome meets World War Z and I Am Legend in this thrilling tale that has it all: a compelling story, great characters, and explosive action, making Positive the ultimate zombie novel of our time.

Twenty years on, everything's great. Or is it?

Twenty years after a zombie apocalypse, Finnegan lives with his family in Manhattan, a sprawling metropolis of 50,000. Everything's fine--if you don't mind constant gardening, fishing in the subway, and coping with paranoid members of the "First Generation" who lived through the worst of the catastrophe.

Things aren't very interesting. That is, not until Finnegan gets the "Positive" tattoo on his left hand, marking him out as Infected. Suddenly, he's an outcast, to be sent to a camp in Ohio. The military are supposed to come get him and take him there--but they don't make it.

So begins the adventure in this book that's less about the undead and more about survival, friendship, leadership, inspiration, and hope. That might sound like a lot for one book, especially a zombie saga, but David Wellington is talented enough to make it work. Positive reads more like Dickens: our hero explores the ravaged world, but also human behavior, and himself. While he's doing that, an incredible variety of secondary characters blooms and grows in the story.

Overall it's a very different take on the situation than the survivor-vs.-undead story. Most books in this genre don't focus on what might happen decades in the future, and Positive's scenario seems pretty realistic (if you can call anything with zombies in it "realistic.")

While the book shows great imagination, there are a few details that might annoy fans of undead chronicles--twenty year old canned food seems perfectly safe, for example, and at times I wondered if there was anything our hero couldn't do. Still, I found myself ignoring all that as I was swept away by the depth of the story and of the relationships between its many characters.

Nick Podehl does a great job as always, with different voices for all those many characters. I always knew who was speaking, no matter how complicated things got.

I've read a great deal of post-apocalyptic fiction, and I have to say this book, while clearly aimed at the "emerging adult" market, is one of the standouts. There's room for a sequel, and I hope that happens. Highly recommended for a fresh and chewy take on the apocalypse!

Good - but not typical of other Wellington stories

In what seems to be a new trend in "Zombie" and other post apocalyptic stories, this one is set in the recovery period, a generation after the collapse. That's a good thing, as I think the stories of collapse are interesting but it would be a real challenge to find something fresh and new in that area. The recovery here is not as complete as in, say, Mira Grant's stories. That leaves a broad canvas for Wellington to tell his story and he uses it well.

I was excited to see another Wellington book. I thought "13 bullets" and the books that followed it were one of the most gritty, brutal, and dark takes on the monster genre I've come across. They reminded me of John Steakley's "Armour" (there's a guy who understands what fear is). Positive is different. In a lot of ways it feels younger, more hopeful, and it's definitely less graphic in its brutality.

There are some very hard themes here, and if you're sensitive to those you may want to give this a pass. Wellington addresses the vulnerability of young women and girls in a lawless society in a very direct way that may bother some readers -- though he is never graphic or puerile in those descriptions. For me, the balance was about right. Be warned, however. If you have a history with, or are particularly sensitive to, that kind of sexual exploitation the mention of it even without graphic descriptions could be upsetting.

Overall, I enjoyed the book even though it wasn't quite what I expected.

Did we really need the pee scene?

I rarely abandon a book that I buy, but I’m not going to finish this one—and I think this is the first time I’ve actually written a DNF review. If it were a physical book, I’d probably toss it in the trash. While I may wonder why the author chose to do/write X, Y, or Z in a novel, I rarely think about the author him/herself—and I don’t want to. This is one of the rare occasions where I actually wondered, what kind of person would write this scene?

Our hero (19) and a teen-aged girl he doesn’t know are searching houses for things they can use. There’s an entire scene where she is peeing in front of him, his feelings about it, and her lack of feelings about it. Then she casually tells him how her the zombies got her sister, and an equally casual discussion of how she was raped. That was when I stopped listening because I knew that it would only get worse.

I should have read the reviews before buying the book and not after. Sigh.

Not really a zombie book

More of a dystopian future. More people problems than zombie. Protagonist makes so many mistakes that it's almost difficult to like him. Great voice for narration. I noticed a couple similarities to the protagonist in Chimera which was disappointing. It was an ok book. I'd read a second installment.

Once upon a time, a bunch of stuff happened

I didn't find this book very entertaining. It didn't seem like the story live was week thought out. I was actually rooting for some of the characters to die so the book would end. I felt completely disconnected from the characters. Events would happen in the story abd were explained at tinge rather than building up to the events. No suspense. If someone needed food they would just suddenly find a store to loot. If they needed clothes they just would get it. It seemed very flat...

Entertaining camper through the apocalypse

A word of caution: this is more like an adventure than like a real novel. One thing happens after another as our hero tries to navigate his way to safety in a post-acolyptic world riddled by zombies. And yet, it is so well written that it turns out to be very entertaining. I can't wait for the next in the series as surely there have to be more coming.

A great spin on the Zom Poc. I am an avid Post Apocalypse and Zombie reader, and listen to tons of audiobooks. This is one of my favorite zombie audiobooks of all time. I only wish it were a series instead of a solo book. There was plenty of possibilities to stretch this story out for at least a trilogy.

Nick is my new favorite audio performer. He is amazing with tremendous range and excellent at conveying emotion and managing multiple characters.

Had to stop most of the way through. The main character is really bad. Nothing new here.

Some things in this book are masterful like what the second generation didn't know, the psychology of the victims of a dreadful life facing dreadful people, and the grittiness of life after the apocalypse. What I didn't like is some times when something in the story would break the spell for instance they had a battle and they had time to prepare and some people who knew a little about combat but they hid in houses and the bullets went through the walls and wounded some people. I couldn't help thinking have you ever heard of a foxhole or even a shallow ditch or dirt burm or a basement. In another instance they found a grocery store that hadn't been looted 20 years after the apocalypse... really... come on. It was a good book but there were some things that were completely unbelievable for me.

This was a great zombie novel with awesome new ideas and great character development. The story tied together from the beginning to the end.