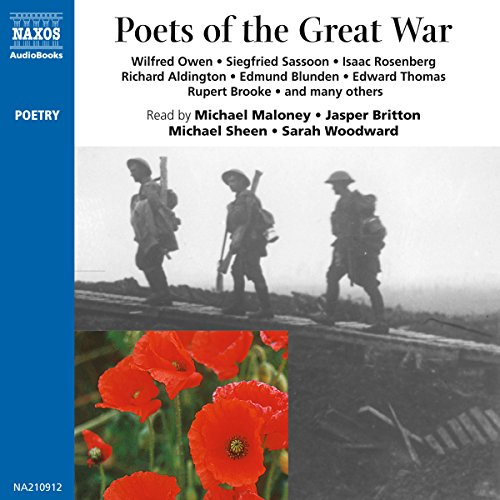 Poets of the Great War

Poets of the Great War presents a moving collection of poetic works produced during World War I, with authors ranging from the famous (Wilfred Owen, Siegfried Sassoon, Isaac Rosenberg) to the less-famous, but equally worthy of regard (Edward Thomas, Edith Nesbit, and Vera Brittain). Dramatic performances from a cast of respected actors of stage and screen lend these pieces an intense, emotional depth - of particular note is Michael Sheen, who, after the production of this audiobook, went on to great success in films and television series like The Queen, Frost/Nixon, and Masters of Sex. Poignant and stirring, the collection comes to an emotionally satisfying conclusion with Laurence Binyon's "For The Fallen", a eulogy for the war's dead.

Here are the extraordinary writings of a generation who fought through a war of unprecedented destructive power, and who had to find new voices to express the horror of what they discovered. The great names - Owen, Sassoon - are fully represented, but there are also many poems by lesser-known or unexpected figures, ranging from serving soldiers like Isaac Rosenberg and Richard Aldington to women such as Edith Nesbit and Vera Brittain. The poems are arranged by theme to give a sense of how the writers' feelings and attitudes evolved.

Beautifully done, and a work worth listening to. I found I could only take this in small bouts as each poem is emotionally charged and puts you in the trenches or stretches. These poets where great writers and the narrators fantastic. I will pull this one out each Anzac Day and listen to it as it not only puts you in the mood, it makes you feel the sacrifice. Love this work.

Enter into the minds of the chaps fighting WWI

Loved it. A wonderful and chilling collection. Really an essential to any WWI enthusiasts book collection.