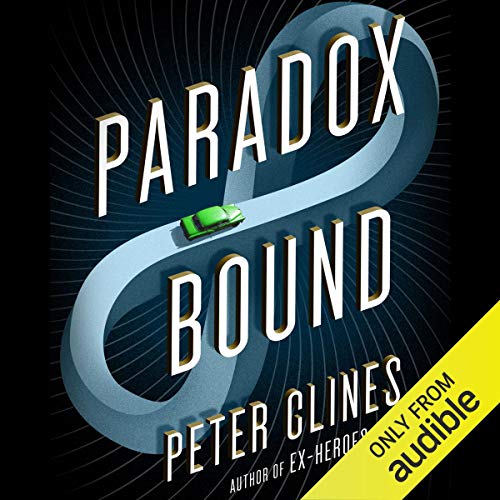 Nothing ever changes in Sanders. The town's still got a video store, for God's sake.

So why doesn't Eli Teague want to leave?

Not that he'd ever admit it, but maybe he's been waiting - waiting for the traveler to come back. The one who's roared into his life twice before, pausing just long enough to drop tantalizing clues before disappearing in a cloud of gunfire and a squeal of tires. The one who's a walking anachronism, with her tricorne hat, flintlock rifle, and steampunked Model A Ford.

The one who's being pursued by...something.

So when the mysterious traveler finally reappears, Eli's determined that this time, he's going to get some answers. But his hunt soon yields far more than he bargained for, plunging him headlong into a dizzying world full of competing factions and figures straight out of legend.

To make sense of the mystery at its heart, he must embark on a breakneck chase across the country and through two centuries of history - with nothing less than America's past, present, and future at stake.

I tried SO hard, I really did!

I normally LOVE Peter Clines. I have read and recommended many of his books, so when I heard there was a new one, I was thrilled.

Cut to my bewilderment as I listened to a book led by a completely uninteresting lead, full of useless characters, with a plot that, while imaginative simply turned out to be useless and dumb.

I'm sad. I adore Ray Porter's voice, and that is the only way I made it to the end of this very very pointless book.

My advice, save a credit and read one of his older works.

I'm a big fan of Peter Clines other books, but this book has been painful to get through, simply because EVERY dialogue plays out similarly:

I began to play a game where I would yell out what I thought Eli was going to say next, and got probably 80% accurate by the end.

The book could have been 8 hours long and a whole lot less tedious without this song and dance.

I only listened to this audiobook once, so I may have missed some important key piece of information that would have made the rest of the book actually interesting. But I doubt it. It reminds me a little bit of Field of Dreams where &quot;the voice&quot; tells Kevin Costner to drive to Boston to find James Earl Jones, and then &quot;the voice&quot; tells both of them to go to Minnesota to find Burt Lancaster, but it turns out they need the Burt Lancaster from 40 years ago when he was a young aspiring base ball player, and eventually they find both old Burt and young Burt. But Field of Dreams WORKS. It is playful and fantastical but also compelling and inspiring. Paradox Bound is none of those things. It is just a confusing mess, with only the very slightest touch to the 14/Fold universe.

I have listened to 14 and The Fold numerous times, happily going wherever the story took me, enjoying every listen and every voice by the talented Ray Porter. But every writer can have a stumble, and you do him no favor if you slather him with undeserved praise based on his past work instead of honest criticism of the current book. I am going to give this book one more try, but if it doesn't get a whole lot better the second time around, it's going to get returned.

Clines' is definitely not a one-hit wonder. I've read his past three novels and all of them manage to exceed my expectations. I haven't read the Ex-heroes series yet but if they're anything like his recent releases, they have to be good.

I love how imaginative his novels are. There are no cliche characters, no guessing the ending by chapter two - I literally have no idea what's going to happen next. And can't stop listening, which for me is unusual. A lot of times I end up zoning out or skipping through audiobooks, wishing it would just be over. I've never done that with this author/narrator pairing. It's like Ray Porter was born to read Clines' novels. I honestly hope he never uses anyone else.

If you're debating whether or not to pick this as your next listen, if you're even remotely into, as another reviewer calls it, "strange" sci-fi or alternate reality type stuff, I promise you it will be worth your time. Even if it's not your usual cup of tea, it's still a really great book.

Traveling through history rather than time

Peter Clines' Paradox Bound is another gem of a listen. Eli keeps bumping into a young woman who always seems to run into car trouble in his home town. He first encounters her as a young boy, then again as a teenager and finally again as young adult. Determined to break free of his home town that never seems to change and believing the woman is in danger, he sets out on an adventure that eventually involves history travel as opposed to time travel, by finding the places where time seems to have stopped or passed the location by. What he learns is a vast array of fellow travelers all searching for the lost American dream (lost since 1963).

The sci-fi elements are quite muted as history travel is dependent on finding &quot;slick&quot; spots around places where time seems to have passed by.The usual paradoxes inherent in time travel are creatively addressed and play into the plot resolution. The faceless men are equally enigmatic in terms of origin and make-up. In spite of little explanation, the story works.

The narration is solid with an excellent range of voices and good pacing throughout.

Huge Fan, Except This Time...

Sorry, Peter, this book was just not up to what I've come to expect from you. The story was sophomoric, the characters shallow, and over all was a plain snooze-fest. I finished it, hoping for some strange bugs, but alias, another disappointment. But don't let this latest release get you down, we know you can do better. Come back strong.

Ray Porter was the one saving grace of this read. I could listen to him read the dictionary.

14 is Clines' high water mark (IMO) and this new work doesn't quite reach even the level of The Fold for pulling you in and keeping you engaged. I WANTED to connect with the characters but never quite got there.

Porter doesn't have the range of some narrators and offers no new voices here, but does an adequate job.

Still, its a fun little story and kept me entertained on a few long runs. I didn't like it as much as I wanted to when I picked it up but don't regret the credit.

I loved The Fold and 14 and thought I'd found a new favorite author, but I could not get interested in this book.

I tried, started over several times, never could find it interesting at all.

I'll be returning this book.

Great book. Made me laugh quite a few times.. If I had to compare it to something it would be like a crossover of National Treasure and the Matrix and it would air on the history Channel. Loved it!

Premise is a little cheesy

I loved 14 and The Fold, so reading Paradox Bound was a no-brainer.

After 1/4 of the way through the book, when you find out what the premise of the book is, you'll have to pause for a moment while you groan and roll your eyes. I guess you should always be suspicious of a book whose description doesn't tell you what the book is about; had I known, I probably wouldn't have read it.

That being said, Porter is great (as usual), and even though the premise is very cheesy, the book is well-written and the story unfolds evenly.

As usual, Ray Porter does an amazing job with his voice acting. And Peter Clines presents here a very well thought-through story of time travel with a novel take on the American Dream. In summary, recommended listening for all fans of Sci-fi and alternate history.

didn't get me invested enough to ...

... finish it. Despite the ever-stellar performance of Ray Porter, I decided to abandon the story after 5 hrs (and I had been bored since hour 3).

The idea might be neat but I do not care about even a single character and that's not enough to sustain me through 7 more hours. Also, the take on time-travel - excuse me, HISTORY travel - didn't thrill me. There's just no there there.

The story was quite entertaining... only the core motivation made me (as a European) cringe hard. You'll know when you get there. Other than that, I enjoyed the travel and interactions. The pacing and length hit the sweet spot for the story told.
The voice actor/narrator does a perfect job in my opinion. The voices are very distinguishable and don't lack consistency.