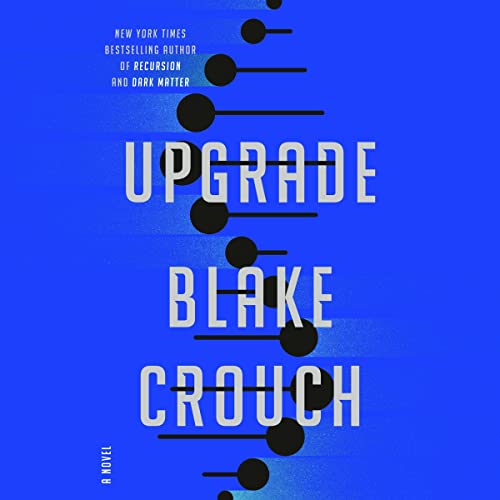 “You don’t so much sympathize with the main character as live inside his skin.”—DIANA GABALDON, #1 New York Times bestselling author of the Outlander series

“Mysterious, fascinating, and deeply moving—exploring the very nature of what it means to be human.”—ALEX MICHAELIDES, #1 New York Times bestselling author of The Silent Patient and The Maiden

“You are the next step in human evolution.”

But before long, he can’t deny it: Something’s happening to his brain. To his body. He’s starting to see the world, and those around him—even those he loves most—in whole new ways.

The truth is, Logan’s genome has been hacked. And there’s a reason he’s been targeted for this upgrade. A reason that goes back decades to the darkest part of his past, and a horrific family legacy.

Worse still, what’s happening to him is just the first step in a much larger plan, one that will inflict the same changes on humanity at large—at a terrifying cost.

And even as he’s fighting, he can’t help wondering: what if humanity’s only hope for a future really does lie in engineering our own evolution?

Intimate in scale yet epic in scope, Upgrade is an intricately plotted, lightning-fast tale that charts one man’s thrilling transformation, even as it asks us to ponder the limits of our humanity—and our boundless potential.

“Amazingly gripping and totally immersive, with brilliant (near-future) worldbuilding and impeccable plot You don’t so much sympathize with the main character as live inside his skin.”—Diana Gabaldon, #1 New York Times bestselling author of the Outlander series

“[A] nail-biting near-future science thriller . . . Crouch fully develops his alarming concept and its implications along with delivering masterful characterizations. This is the best yet from a creative and gifted author.”—Publishers Weekly (starred review)

“From the first page, it’s clear you’re in the hands of a master storyteller; Upgrade is by turns mysterious, fascinating, and deeply moving—exploring the very nature of what it means to be human. Spellbinding.”—Alex Michaelides, #1 New York Times bestselling author of The Silent Patient and The Maidens

The reader is aweful. He has weird inflections, pauses, and sentence run-ons. He doesn't alter his voice for different characters, so conversions sound like one long monologue. It's really a shame, because other Crouch books have had excellent readers. This one is really hard to listen too. Did anyone listen to this performance before uploading it to Audible?

NARRATOR'S FEMALE VOICES ARE NOT GOOD

Blake Crouch is amazing. I'm sure this story is as well. The narrator started out strong too. All was good and exciting and hopeful. I even saw the reviews complaining about the narrator's female voices but I was determined to have a better experience... Not so, unfortunately. All of Henry's female voices sound like a 5 year old child, which really distracts from the awesome story and takes depth away from all of the female characters. PUBLISHER: RE-RECORD THIS TITLE WITH A DIFFERENT NARRATOR. IT WAS JUST RELEASED AND THERE ARE ALREADY NUMEROUS REVIEWS SAYING THE SAME THING. BITE THE BULLET AND DO THE RIGHT THING FOR THE SAKE OF THE STORY AND THE LISTENERS. Personally, I'm buying the paperback version and returning the audible one.

I was enjoying the story but I could not get past the way the narrator did female voices. They sounded childish. I will be reading a paper copy of this book because I do enjoy Blake Crouch's writing.

The future is now, we’ve mastered genetic engineering but everything else is exactly the same.

I still give it 5 stars because it's such ab awesome book... the story, the characters ... all great... it's just my kind of stuff... definitely up there with recursion but that one is still my favorite... damn, this one narrated by Jon Lindstrom would hit the spot... still worth a credit... an amazing experience

Not one of his best

First, the narration. It wasn't great. It wasn't awful. It was just meh. Someone like Edoardo Ballerini would have been a better choice in my opinion. Someone who could have showed a bit more range and a bit more emotion, especially given the main topic at hand.

Second, this wasn't Crouch's best work. There were small moments where he'd fool me into thinking that the action and pace were going to pick up, just after he finishes this one last inner monolog, but no. It never came. At no point did I think about this story other than my normal reading times. Same can be said about my desire to push on to see what happens next. The best part of it is actually the epilogue, and I don't see that tongue in cheek because it's ending. It's actually the only part that made me feel anything other than "wow, this is pretty boring, I hope it's almost over".

TLDR: Below average narrator and a below average story makes for a bit of a snooze fest. Everything else by Crouch previously I'd put ahead of this. It was a swing and miss for me.

I tried my hardest to get into this book and just couldn’t. I did get through though. I wasn’t a fan of the narrator. It’s not a terrible book but I didn’t think it lived up to his other books.

I really wanted to enjoy this book. I enjoyed other works by this author and expected a similar level of storytelling here. Not so. On the whole, character development is utterly absent. The pacing is clunky and lacks any level of suspense, and there’s no emotive intensity to the setting whatsoever. A bland slog through a bland mind.

The super-enhanced, supremely intelligent main character makes a number of strange decisions that leave the reader wondering if his “upgrade” ever really worked at all. Here are some examples: (This first one is, admittedly, a little petty) pairing a big Cab with chicken (which was possibly cooked in white wine). This is occasionally done but generally considered to be a bad pairing, especially with the aforementioned white wine, and especially if climate change had transformed that Northeast Cab into something more Californian. Fail.

Second, he drops the syringes into the river. Does he consider that they might leak into the water and infect everyone? Will they remain in damaged and be picked up by an unsuspecting riverside child? Will the creatures of the river become exposed? Does it make it into the local water system? None of this is considered.

Lastly, and perhaps most obnoxiously, the main character searches for a word to describe his combined sense of joy and heartbreak at the end of the book. He is unable to find it and draws a comparison instead. The word you’re looking for is “bittersweet”, genius. Leave it to this non-upgraded brain to come to the rescue.

I would not recommend this book. It’s rushed, has numerous plot holes, and is generally poorly written.

Mediocre super hero/Gi-joe plot. Full of lists of cool-sounding weapons and action sequences that go nowhere. After Recursion and Dark Matter this was a let down.

Please Save the credit for anything else.

Their really isn't anything good to say about this waste of time and money. Oh wait the good thing is its over, and I've learned to avoid anything narrated by Mr Levya. I gave the performance 2 stars due too what he was working with. Whomever edited this should be ashamed.
Being polite I'll call it garbage but there is a better expletive, hint it ends up in the toilet .