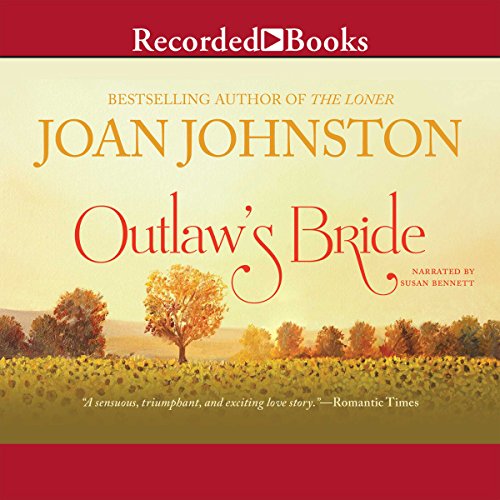 Patricia "Patch" Kendrick arrives in Oak County, Tex., from Fort Benton, Mont., to claim Ethan Hawk, a man who jokingly promised to marry her eight years earlier when he was a 25-year-old running from the law and she was the precocious 12-year-old daughter of a man who befriended him.

Patch has transformed herself from a tomboy into a well-bred woman, but Ethan's position remains largely unchanged. Though he was eventually caught and jailed for murder, he has been stalked since his release by the father of a woman he allegedly raped. Ethan swears he found Merielle after the rape and that he killed in self-defense. Merielle can't shed light on those events, because since the trauma she has had the mind of a child. Ethan pretends he's not in love with Patch as she attempts to clear his name in a manner that demonstrates that under the veneer of high society remains a core of will and assertiveness.

I loved the book! Joan Johnston's story combines all of the elements that make for a great historical romance ... mystery, sub-plots, rich characters, passion, conflict and a 19th century AMERICAN setting. I wonder if I would have enjoyed the book as much though had I read it myself. Susan Bennett's narration style was the icing on a delicious cake. She gave added depth to the characters with a style that fully captures their emotions and personalities. Anyone who regularly listens to Audible books knows that there are three skills that a great narrator possesses that sets him or her apart from the rest: an ability to speak a character's lines in a manner is (1) GENDER (2) AGE and (3) REGIONALLY appropriate. Susan Bennett hit a grand slam with this story by nailing all three. Her rich narration style distinguishes males from females, the very young from the very old, and the native-Texans from transplants.

I love historical romances that are set in the western United States. Regency romances are not for me. I like my stories with some spice too; and although I am Catholic, I am not a fan of the 'inspirational romances'. I'm a big girl now and if I want to experience a sanitized story, I'll listen to my 14-year old daughter while she describes how she fell for the latest boy that she is 'Snap Chatting' on her phone! Unfortunately, the genre that I love is harder to find on Audible. I've listened to just about all of the books that meet my selection criteria and I gobble up the new releases as quickly as they arrive. Thus, I plowed through this book with a speed that would put Evelyn Wood to shame! Once I started to listen, I just could not stop. I hoped for a traffic jam to slow my commute; I endeavored to complete any task that could be accomplished wearing a headset. And two short days later, the story was finished and I experienced that dichotomy of emotions that a reader experiences upon reaching the end of an amazing story: fulfillment and emptiness. What can I listen to now? What book can I find that will possibly keep my interest as well as the story I just consumed? No worries ... I'm sure I'll find it but please Audible, give me more selections like this!

First time listen for this author.
Great feel good story with very likable characters, especially the strong minded Patch. Ethan was masculine without displaying arrogant alpha ways. It’s pretty easy to pick out the villain but not so easy to figure out how to get out of their situation. That said, I almost feel bad for the guy. Almost.
Superb narration!
👍🏻 👍🏻