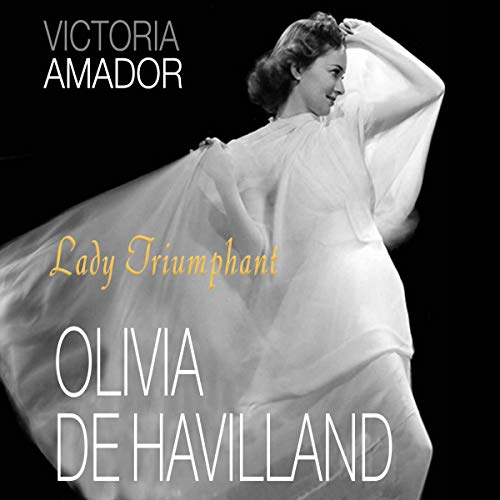 Legendary actress and two-time Academy Award winner Olivia de Havilland is best known for her role as Melanie Wilkes in Gone with the Wind (1939). She often inhabited characters who were delicate, elegant, and refined. At the same time, she was a survivor with a fierce desire to direct her own destiny on and off the screen. She fought and won a lawsuit against Warner Bros. over a contract dispute that changed the studio contract system forever. She is also noted for her long feud with her fellow actress and sister Joan Fontaine, a feud that lasted from 1975 until Fontaine's death in 2013.

Victoria Amador utilizes extensive interviews and 40 years of personal correspondence with de Havilland to present an in-depth look at the life and career of this celebrated actress. Amador begins with de Havilland's early life; she was born in Japan in 1916 to affluent British parents who had aspirations of success and fortune in faraway countries, and her theatrical ambitions began at a young age. The book then follows her career as she skyrocketed to star status, becoming one of the most well-known starlets in Tinseltown. Listeners are given an inside look at her love affairs with iconic cinema figures such as James Stewart and John Huston and her onscreen partnership with Errol Flynn. de Havilland became the first woman to serve as the president of the Cannes Film Festival in 1965 and remained active but selective in film and television until 1988.

"This is a treat for film fans." (Booklist)

This audiobook offers a comprehensive biography of Olivia de Havilland, one of the greatest actresses of the 20th century. Wonderfully written and read, I found the book fascinating from beginning to end.

Not having a great amount of knowledge about the life of Olivia de Havilland beforehand, after listening to this, I came away feeling like I had a real sense of who she was. She was a complicated person, and the author doesn’t shy away from broaching some of her more temperamental episodes.

The narrator is excellent. She is clear and relatable and moves the book along at just the right pace.

Overall this audiobook is a great listen and leaves the reader appreciating the life and artistry of Olivia de Havilland like never before.

I have enjoyed Ms de Havilland since my first viewing of Gone With The Wind. Her independence at a time when women were pigeoned holed in certain roles, limited by the contract restraints that she fought against...remaining single and not forced into the belief she must be married at a certain age.
Her films are detailed, the story, her clothes and her co-stars..all interesting as a way to make you want to watch some of the movies. This wasn’t exactly what I expected..but other incidents in her life were covered and I found interesting.
The narrator did a nice job.
I received a free audiobook for an honest and voluntary review.

It could’ve been way better!

In the introduction we learned that the author had a 40 year or more correspondence with Olivia de Havilland and that she constantly asked her if they could meet as Paris was her favorite place to visit and respectfullyMiss the Havoline declined more than once. So on a trip to Paris for a friends birthday a friend convinces her it’s the thing to do just to show up at Olivia de Havilland zone, despite even given her a heads up she declined but no let’s go and put 90-year-old Olivia de Havilland on the spot and again her assistant answered the door and politely declined. Then she gets a letter saying Mr. Havoline will see her probably due to the fact she felt guilty for not seeing her on her trip to Paris and so therefore head or over 40 when she was once again in Palace and wants again sent a letter asking to see her and so finally she got an audience with Olivia de Havilland. Having said all this you would think having a 40 year correspondence and meeting her in person that this book would be full of nuances funny little stories and things behind the scenes, but no this may as well have been written by Olivia de Havilland publicist because it is all fax you can get off of Wikipedia and read like a college textbook biography. I was very disappointed by this autobiography as I love Olivia de Havilland and don’t know anymore than I did before I read this book not to mention Olivia de Havilland live to 104 years old and only died last year and she equates her life and her personality to Rome in a movie she filmed in 1939 a good movie no doubt but still just the character part and although it was Miss Olivia de Havilland‘s favorite part the author couldn’t help but continuously compare her and Miss Melody from gone with the wind. As I said I was very disappointed in this book and although I love the narrator and love the bio she does it was wasted on this book.