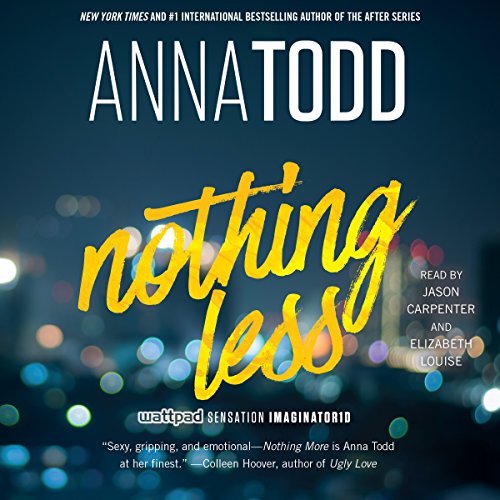 Book two of a new series featuring After worldwide fan favorite Landon Gibson as he leaves Washington to navigate love and life in New York City. At the end of After Ever Happy, Landon got married - but listeners everywhere have been wondering who will get to call the nicest boy in the After series their forever love. Listen to it and find out!

"I'm so excited for everyone to get to know Landon Gibson. Whether you're just hearing about him or already know him from the After series, I know that listeners are going to love his story. He's kind and fiercely loyal, and when he falls in love, he loves hard." (Anna Todd, New York Times and number one international best-selling author of the After series)

I love Anna Todd. You have me laughing, crying and happy and sad in this series and the After series.

loved it though was left wanting more. It was a great way to tell landons story.

Better than the first book!

It starts off slow but got more interesting. But I kept wanting to hear more about Hardin and Tessa through Landon's point of view.

i loved that we got to see things through London. That we still have Harden and their relationship Between Brothers/ best friends... very enjoyable reading

Landon is a complete opposite of his step brother. He is a giver and a fixer. He also has a heart of gold and doesn’t let much get to him. He is definitely a character you can fall in love with. Even though he has suffered some heartbreak this story is wonderful how it comes together in the end.

I love every sentence of this book, Anna Todd did a magnificent job.

I love Landon so much, what a wonderful man he is. Nora was a little too much for me sometimes with all the secrecy, but at the end things worked out way I absolutely love.

I really liked Landon in Part 1, but here he is even more grown-up and he seems to be really sexy. He is funny to talking about his own stupidity. Nora was a kinda secret till the very end, and I didn't like Dakota. I 'm glad that Landon married the right woman at the end.