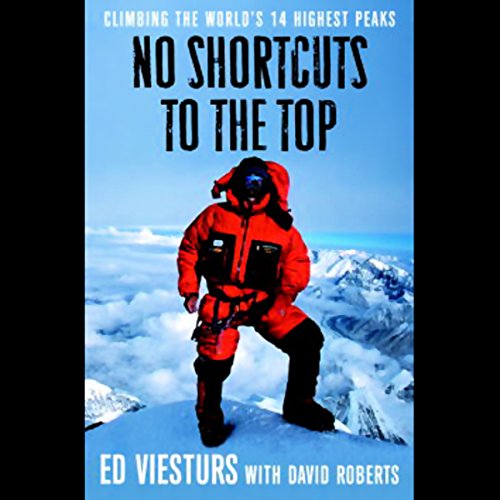 No Shortcuts to the Top

No Shortcuts to the Top

This gripping and triumphant memoir follows a living legend of extreme mountaineering as he makes his assault on history, one 8,000-meter summit at a time.

For 18 years, Ed Viesturs pursued climbing's holy grail: to stand atop the world's 14 8,000-meter peaks, without the aid of bottled oxygen. But No Shortcuts to the Top is as much about the man who would become the first American to achieve that goal as it is about his stunning quest. As Viesturs recounts the stories of his most harrowing climbs, he reveals a man torn between the flat, safe world he and his loved ones share and the majestic and deadly places where only he can go.

A preternaturally cautious climber who once turned back 300 feet from the top of Everest but who would not shrink from a peak (Annapurna) known to claim the life of one climber for every two who reached its summit, Viesturs lives by an unyielding motto: "Reaching the summit is optional. Getting down is mandatory." It is with this philosophy that he vividly describes fatal errors in judgment made by his fellow climbers, as well as a few of his own close calls and gallant rescues. And, for the first time, he details his own pivotal and heroic role in the 1996 Everest disaster made famous in Jon Krakauer's Into Thin Air.

No Shortcuts to the Top is more than the first full account of one of the staggering accomplishments of our time; it is a portrait of a brave and devoted family man and the beliefs that shaped this most perilous and magnificent pursuit.

If you could sum up No Shortcuts to the Top in three words, what would they be?

I love that Ed Viesturs read the audiobook - the authors always do a much better job. I've read all of Krauker's books, so this was a really nice perspective on mountaineering and it was thoroughly enjoyable.

Have you listened to any of Ed Viesturs’s other performances before? How does this one compare?

No, I haven't. I will listen to more.

It did make me laugh at times, and there were moments when I felt like crying. It's a great book.

Great audiobook! Perfect for anyone interested in climbing, mountaineering, or fans of Krauker.

Amazing story narrated by the author. Very inspiring and actually going to now listen to the unabridged version.

Really enjoyed the fact that Ed was the narrator. He telling his own story was nice.

Incredible.....I've listened to it 5 times now and it makes blows me away every time.For me it started a fever........4 of the highest europeen peaks so far...and counting!!