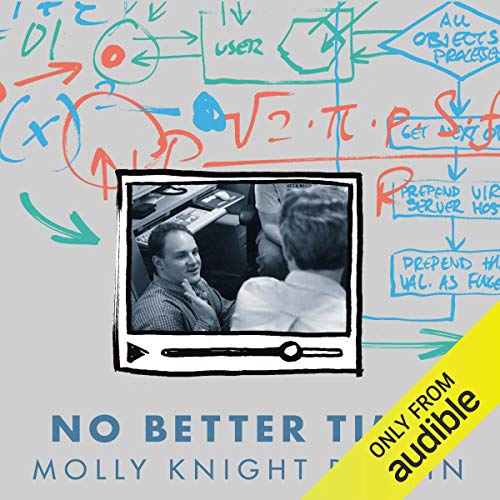 No Better Time tells of a young, driven mathematical genius who wrote a set of algorithms that would create a faster, better Internet. It's the story of a beautiful friendship between a loud, irreverent student and his soft-spoken MIT professor, of a husband and father who spent years struggling to make ends meet only to become a billionaire almost overnight with the success of Akamai Technologies, the Internet content delivery network he cofounded with his mentor.

Danny Lewin's brilliant but brief life is largely unknown because, until now, those closest to him have guarded their memories and quietly mourned their loss. For Lewin was almost certainly the first victim of 9/11, stabbed to death at age 31 while trying to overpower the terrorists who would eventually fly American Flight 11 into the World Trade Center. But ironically it was 9/11 that proved the ultimate test for Lewin’s vision - while phone communication failed and web traffic surged as never before, the critical news and government sites that relied on Akamai - and the technology pioneered by Danny Lewin - remained up and running.

Danny Lewin was a bodybuilder, a former Israeli commando, and received his Ph.D. in mathematics from the Massachusetts Institute of Technology. Lewin founded the Akamai Technologies Company after graduation from MIT. A very simple explanation of Lewin’s work is to say he developed a new way of routing network traffic that allows the major websites to deliver more content faster. This allows millions to read the same news story or watch the same internet video simultaneously. The proof of his success occurred on September 11, 2001 when Akamai customers such as CNNs internet site coped with the demand for news.

The tragedy is that Lewin was on one of the hijacked commercial airliner, American flight 11, the first to crash into the World Trade Center. Lewin was in seat 9B surrounded by the hijackers. Apparently he realized the plane was being hijacked and tried to stop one of the men, unaware he was surrounded by hijackers. He was the first to die that day when they slit his throat.

This is a great story about a brilliant man. I only wish the book had been written with more details and information. I want to know more about his family; his life in Israel. And more detailed information about how a fourteen years old American teenage adapted to life in Israel and difficulties learning a new language. As a scientist, I want more detailed information about Lewin’s work. Raskin is a documentary film producer and she wrote the story in that brisk style. I would have preferred to have more in-depth information about all aspects of the story instead of the quick highlights that is the style of a documentary film. To me the story comes across as flat and abrupt. I may be influenced by my preference for books over films; maybe another person would view the book differently. This book only wet my appetite but left me hungry for more information. I do hope that in the future a biographer will write the life story of this interesting man. Christine Marshall did a good job narrating the story.

This was a surprisingly engaging (and heartbreaking) story about a remarkable man (and a whole group of remarkable people around him) who revolutionized how content is delivered in the Internet, enabling so much of what we take for granted today. The narration was pretty good, but the production was a bit careless. At least three times the narrator said the wrong name for Lewin (instead saying Lewis), and there were a bunch of similarly glaring errors which should not have made it into the final released audio.

To anyone with any interest in tech or startups, this is required reading.

What other book might you compare No Better Time to and why?

Probably any of the "history of how this company launched" books. I haven't read many, but the book is more about akamai than Danny specifically.

Have you listened to any of Christine Marshall’s other performances before? How does this one compare?

I haven't but she was really good in this.

Knowing Danny was likely the very first casualty of 9/11 and not just a casualty was tough to hear.

A very cool story about a dynamic man. Learned some interesting background about the evolution of the internet, as well. Danny's work made important contributions to what we take for granted now,