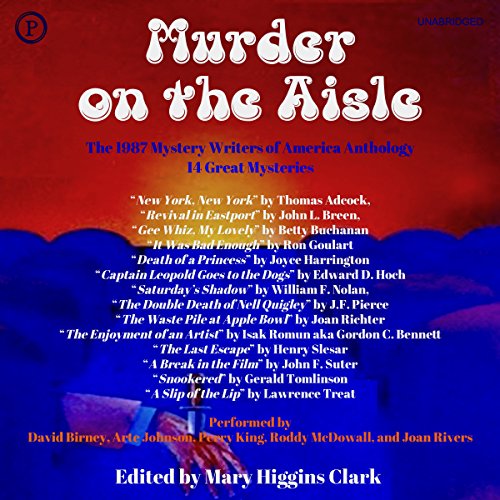 Murder on the Aisle

Prepare to be entertained by a host of Hollywood celebrities reading the finest collection of short mystery stories surrounding the world of entertainment. Includes:

"Revival in Eastport" by Jon L. Breen - enter the critic's corner and hear why a favorable review can be a life-threatening experience.

"The Enjoyment of an Artist" by Gordon Bennett writing as Isak Romun - a frightening hoax for a famed pianist who cannot complete his concert because his piano explodes on stage.

"A Break in the Film" by John F. Suter - the ritual of going to the hometown movie theater on a Saturday afternoon proves that not all the excitement, intrigue, and romance happen on the silver screen.

"Gee Whiz, My Lovely" by Betty Buchanan - a bouncy private investigator is invited by a "gorgeous nut" to find an elusive figure named Harvey.

"It Was Bad Enough" by Ron Goulart - the tragic story of a comedian making his career comeback learns his ex-wife's tell-all book is about to be filmed.

"Snookered" by Gerald Tomlinson - the story of a new breed of football coach and a team the sportswriters can't ignore.

"The Waste Pile at Apple Bowl" by Joan Richter - a top television news reporter covers a coalmining disaster, and a young woman's family has been among the victims.

"A Slip of the Lip" by Lawrence Treat - the tale of a murdered musician betrayed by his musical training.

"The Double Death of Nell Quigley" by J. F. Pierce - a lady of the evening offers her favors to one too many suitors.

"Death of a Princess" by Joyce Harrington - a valiant effort to stave off death.

"Saturday's Shadow" by William F. Nolan - a moviegoer's world known only by the characters created on the screen, explores the dark side of the compulsive movie stuff.

"New York, New York" by Thomas Adcock - the story of what happens when an actor's dream of glory remains just that.

"Captain Leopold Goes to the Dogs" by Edward D. Hoch - the captain doesn't get a chance to take his winnings home from the dog races.

"The Last Escape" by Henry Slesar - a chilling magical experience and two chances to watch a magician's performance.

Some good some not so good

This is not my favorite of the Mystery Writers group of stories, but did enjoy some of them.