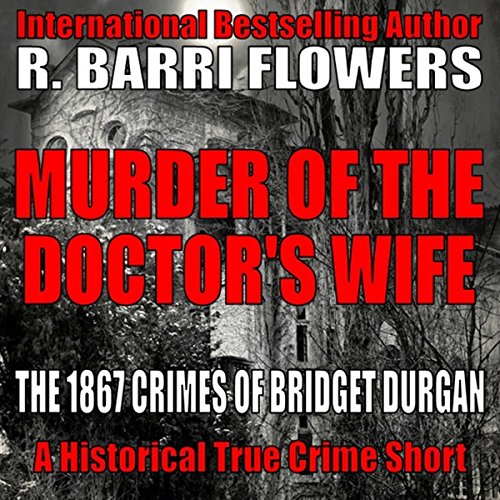 Murder of the Doctor's Wife

From R. Barri Flowers, award-winning criminologist and best-selling author of Murder During the Chicago World's Fair, Murder at the Pencil Factory, and Murder of the Banker's Daughter, comes the riveting historical true crime short, Murder of the Doctor's Wife: The 1867 Crimes of Bridget Durgan.

On the evening of Monday, February 25, 1867, Mary Ellen Coriell was brutally murdered at her home in Newmarket, New Jersey. The cold-blooded nature of the murder was shocking enough for residents of the town and elsewhere, but even more disturbing was that the culprit turned out to be the victim's housemaid, an attractive young Irishwoman named Bridget Durgan. The circumstances surrounding the murder - including jealousy, obsession, and delusion - were as old as time itself. The crime would come at a very steep price for the murderess who would be executed for the heinous act.

The death of Mary Ellen Coriell also weighed heavily on the object of Bridget's affections, the heartbroken victim's husband, Dr. William Coriell, who would be left to care for the couple's young daughter alone. The unspeakable tragedy would also be felt throughout the community for many years to come.

The sad tale of Mary Ellen Coriell's untimely demise at the hands of someone she trusted and was ultimately betrayed by is a must for students of history, true crime, and homicide.

A complete bonus story, Murder of the French Lover, chronicles the May 21, 1892, scandalous murder of Madame Lassimonne in Paris, France, by romantic rival, Claire Reymond, and its stunning outcome.

Other bonus material include excerpts from R. Barri Flowers' best-selling true crime shorts, Murder During the Chicago World's Fair, Dead at the Saddleworth Moor, Missing or Murdered, and an excerpt from the author's true crime book, Serial Killers and Prostitutes.