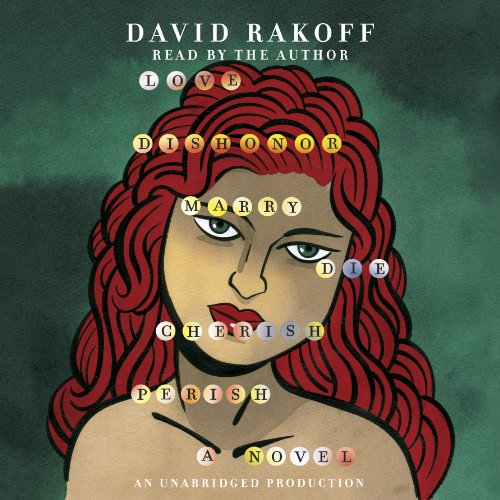 Audie Award Finalist, Narration by the Author or Authors, 2014

From the incomparable David Rakoff, a poignant, beautiful, witty, and wise novel in verse whose scope spans the 20th century.

Through his books and his radio essays for NPR's This American Life, David Rakoff has built a deserved reputation as one of the finest and funniest essayists of our time. Written with humor, sympathy, and tenderness, this intricately woven novel proves him to be the master of an altogether different art form.

Love, Dishonor, Marry, Die, Cherish, Perish leaps cities and decades as Rakoff sings the song of an America whose freedoms can be intoxicating, or brutal.

The characters' lives are linked to one another by acts of generosity or cruelty. A daughter of Irish slaughterhouse workers in early-20th-century Chicago faces a desperate choice; a hobo offers an unexpected refuge on the rails during the Great Depression; a vivacious aunt provides her clever nephew a path out of the crushed dream of postwar Southern California; an office girl endures the casually vicious sexism of 1950s Manhattan; the young man from Southern California revels in the electrifying sexual and artistic openness of 1960s San Francisco, then later tends to dying friends and lovers as the AIDS pandemic devastates the community he cherishes; a love triangle reveals the empty materialism of the Reagan years; a marriage crumbles under the distinction between self-actualization and humanity; as the new century opens, a man who has lost his way finds a measure of peace in a photograph he discovers in an old box - an image of pure and simple joy that unites the themes of this brilliantly conceived work.

Rakoff's insistence on beauty and the necessity of kindness in a selfish world raises the novel far above mere satire. A critic once called Rakoff "magnificent", a word that perfectly describes this wonderful novel in verse.

"Mesmerizing... Combines his wit and his gravity....Astounding." ( Publishers Weekly)
"A fitting memorial to a humorist whose embrace of life encompassed its dark side...[the book] retains a spirit of sweetness and light, even as mortality and inhumanity provide a subtext.... Strong work. It deepens the impact that this was the last book completed by the author." ( Kirkus Reviews)

Writing novels too easily? Try this parameter…
Write it all in anapestic tetrameter
“’twas the night before Christmas” in rhythm and rhyme,
But thoughtful and searing. Disturbing. Sublime.

And how like this author, this thoughtful word dancer
Who as he wrote fought his last battle with cancer,
To write resolutely with head in the noose,
And bolster himself with the rhyme scheme of Seuss.

If you read this book (and you must) be beguiled!
Tales worthy of Dickens, wit wondrously Wilde.
Some Thurber and Twain, (sorry… now I digress...
This novel inspires literary largesse.)

His instinct with rhyme is inherently true.
Not at all like a limerick - more like haiku.
His word choices fit like a key in a lock,
The drawings of Escher, the great fugues of Bach.

At once ominous, funny, then caustic, then sweeter.
The achingly personal couched in a meter
That makes it so eloquent - thrilling to follow.
A pill of hard truths you’ll be eager to swallow.

Can a novel composed in iambic pentameter be relatable, detailed, and meaningful? The answer is a resounding yes! Rakoff's lyrical rhyming composition doesn't detract or sacrifice story. It's not just a novelty for he packs each character's storyline with ironic and heartbreaking realism. A girl suffers a tragic event only to be dismissed by insecure mother; a secretary navigates a sexist boss in a loveless affair, and many other stories and scenarios I won't spoil.

This novel is brief, yet loaded with satirical and tragic tales of ordinary people dealing the hand they're dealt. It's heartbreaking, yet beautiful. The vocabulary, turn of phrase, and irony transform this "poem" to a higher level. Felt I needed to revisit the 500 core GRE words to keep up! Listened on 1X to absorb the meaning and paused frequently to take in all the information. Short, yet thought-provoking and sad this is his last work. If you enjoyed this, check out another of his books, "Fraud."

What made the experience of listening to Love, Dishonor, Marry, Die, Cherish, Perish the most enjoyable?

Although the author has written this novel in verse, the story and the flow of the language are not limited by the rhymes. Wise, knowing, humorous writing. Characters I wanted to spend more time with. Vignettes that felt true and real, told in the most beautifully elevated yet natural way. From meatpacking workers in the early part of the 20th century (?) to San Francisco in the 1980's, we enter the characters' little worlds and get to know them, briefly but deeply. The best poetry, of course, can condense language and make it powerful. I think Rakoff has succeeded beautifully here.A word on the narration: the author apparently felt strongly about reading his own book despite being weakened by cancer. It's true, the voice is a little frail, a little breathless at times. To me, it only added to the poignancy. Hearing this story read to me felt like a gift. I didn't find it hard to hear or understand, and I easily adjusted to the style.

I love the whole story of Cliff.

So sad this author is gone.

Where does Love, Dishonor, Marry, Die, Cherish, Perish rank among all the audiobooks you’ve listened to so far?

I am very sad to find that the author is no longer with us. I actually found the rhyming of this book to be lovely and it takes more time and effort and just plain smarts to write a book that also 'rhymes'. Mr. David Rakoff has departed this world, leaving his mark behind with one last heartwarming and heartwrenching, humorous, intelligently clever, forlorn and brilliant novel. David's own voice reading this story makes me long for his return - but is a reminder that our last words spoken are forever a part of this world. Especially now that we can put our words into recordings. Love, Dishonor, Marry, Die, Cherish, Perish: A Novel, are short stories in verse form which are an absolute treat to listen to, and a reminder that the spoken word lives on.

Beautiful bleak and a haunting voice

Worth it just got the post log by the audio engineer after the author. That said...one appreciates it even more hacking spent those hours with the author.

And a fiercely lovely soul fluently flying among words and sounds and bulls eye things to say. I really miss this light but never met him (in the person)

I love David Rakoff. Thank God this gorgeous funny wicked man was born and shared his thoughts with us while he was here. nothing but gorgeous human imperfectly flawless love.