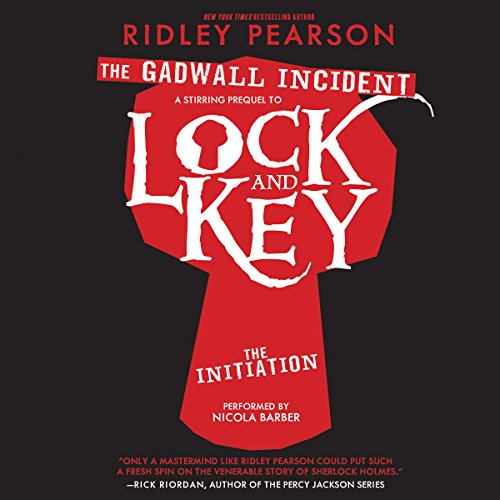 Lock and Key: The Gadwall Incident

The New York Times best-selling author of the Peter and the Starcatcher and Kingdom Keepers series, Ridley Pearson, brings us the stirring digital prequel to the Lock and Key series, which reimagines the origins of the rivalry between Sherlock Holmes and James Moriarty.

In The Gadwall Incident, listeners get a glimpse into James' life a mere 24 hours before the tipping point - before life as he knows it changes irrevocably and his childhood slips into the shadows. Listeners will come to know the dangers that surround the Moriartys before James and Moria are sent off to the hallowed halls of Baskerville Academy, where they first meet the insufferable, inexhaustible Sherlock Holmes. It's a tale full of intrigue and false starts and daring getaways, one that will leave listeners desperate to know what's next.

This audiobook was delivered masterfully! However, story-wise, it took me 10 chapters to capture my interest. there was a lot of author intrusion that kept reminding me that I was listening to an audiobook instead of being immersed in a story.

Just what I needed from a book. Short and well written. Kept my interest from the start.

This is a prequel book for Lock & Key. I wasn't sure what to expect for a free prequel but this definitely has me looking forward to Lock & Key. Good story and narration.

Missed chance at a good book.

This was truly a missed opportunity to make a good book! Too much left unknown!

there was no end. just leaves you hanging.

A nice freebie story, but it sadly ends on a screaming "read the series" cliffhanger that soured the experience for me.

Loved it! It was entertaining with a great storyline. I do recommend reading this book.

Simply fantastic to be drawn in this way. Love it. Definitely looking forward to more from this author.

I was really excited to listen to this book for several reasons...#1 It’s by one of the authors of Peter and the Starcatcher‘s...#2 It’s was a Sherlock Holmes story...#3 I love fantasy fiction! It may be a great book...but the narrator was so bad that I just couldn’t listen to it :(