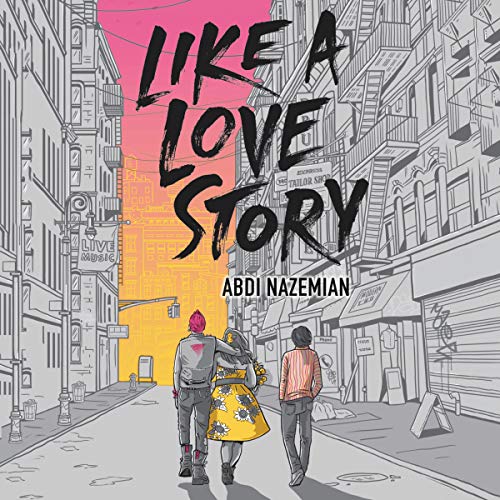 “A love letter to queerness, self-expression, and individuality (also Madonna) that never shies away from the ever-present fear within the queer community of late '80s New York, Like a Love Story made me feel so full - of hope, love, courage, pride, and awe for the many people who fought for love and self-expression in the face of discrimination, cruelty, and death.

"A book for warriors, divas, artists, queens, individuals, activists, trend setters, and anyone searching for the courage to be themselves.” (Mackenzi Lee, New York Times best-selling author of The Gentleman’s Guide to Vice and Virtue)

It’s 1989 in New York City, and for three teens, the world is changing.

Reza is an Iranian boy who has just moved to the city with his mother to live with his stepfather and stepbrother. He’s terrified that someone will guess the truth he can barely acknowledge about himself. Reza knows he’s gay, but all he knows of gay life are the media’s images of men dying of AIDS.

Judy is an aspiring fashion designer who worships her uncle Stephen, a gay man with AIDS who devotes his time to activism as a member of ACT UP. Judy has never imagined finding romance...until she falls for Reza and they start dating.

Art is Judy’s best friend, their school’s only out and proud teen. He’ll never be who his conservative parents want him to be, so he rebels by documenting the AIDS crisis through his photographs.

As Reza and Art grow closer, Reza struggles to find a way out of his deception that won’t break Judy’s heart - and destroy the most meaningful friendship he’s ever known.

This is a bighearted, sprawling epic about friendship and love and the revolutionary act of living life to the fullest in the face of impossible odds.

A must read for all

This book is set in 1989/1990 and is a snapshot of NYC life for a few teenagers and a whole lot of Queer folx fighting for their lives during the AIDS epidemic. It was so well done & I cried and I laughed and I reminisced. Such an important look at culture, family, and finding your true self.

Love the narration by Micheal crouch.

I was not a big fan of the this book. I don’t completely hate the book either. It had potential to be something amazing and explore topics on deeper levels but it fell short for me. The narration by Micheal crouch kept me going. I found the characters frustrating minus Art and uncle Steven. Art and uncle Steven were the only characters I liked. I found Rena to be a very annoying character, along with Judy and I wished that there were more scenes with uncle Steven.

The writing, the performance, the story are all phenomenal. This is an amazing work! Nazemian writes from multiple points of view with compassion and deep understanding. I was only in grade school during this time and while I understand the references now, hearing them in a different context has been wonderful.

A beautiful and compelling story to read

This book was amazing. Initially it was a little slow pace however once the story developed itself it was well told. Historically beautiful.

It was a touching and heart warming story. I cried and cried. I highly recommend it.

I was a sophomore in college during the year this book takes place, and other than seeing the AIDS crisis all over the news, it never really touched my life. So this book really brought home, in a small way, how it must have felt to be a gay teen during those early years, when so much was unknown. It honestly never crossed my mind back then, to wonder how AIDS was affecting younger people, those of my generation at the time. It's not that I lived in a bubble, but small towns in southern MD and WV (for college), in the late 80s, didn't have quite the demographics your larger cities did. Sure, we may have had an inkling a fellow classmate was gay or lesbian, but I can't recall a single classmate who was "out", not until years later.

I had to take a break from this book, with about 2 hours left. I knew what was coming and I just wasn't ready to handle it. I finally picked it back up and powered through. For all the heaviness of this story, it really wasn't until those last couple hours of the audiobook that it all started weighing on me, and I cried pretty much through to the end.

So much in this book is thought-provoking. It really opened my eyes to a time in history that, even though I was alive during, I really had no clue about, except in the most broadest of terms. Like a Love Story is another book that I hope finds its way into school libraries. It might be weird to say this about a young adult novel, but it's a history lesson many could learn from.


A fun thing for me in this book was the mention of the Cap Center here in MD! I don't believe I've ever seen it mentioned in a book before! And I'm pretty sure I was at that same Madonna concert with them!

I forgot to mention anything about the actual audiobook itself! This is one of those books that I'm glad I listened to instead of just reading it- the three narrators really helped bring this story to life. I liked getting 3 points of view from this time in history, even though it was from 3 teens. Art and Reza were my favorites- you really got to see how different they saw the world and what was happening around them.
Michael Crouch is a favorite when it comes to narrators for young adult, he's always terrific. I'm a fan of Vikas Adams, as well. Although he sounded just a little too old for Reza, I did enjoy all the emotions he brought to the character. Lauren Ambrose is a new to me narrator. Her portrayal of Judy was well done. She has a very pleasant sounding voice, age appropriate, and she brought the emotions when needed. I would definitely recommend the audiobook.

I'm not a fan of endings like these, but I did have a good time along the way.

its a friendship of love, humanity and appreciation. It was a book that I was not expecting.

A book that should become a part of school educational system. Great! Amazing! Really loved it! :)

Great book, rip your heart out, but it teaches a lot. I loved the feeling they all showed and shared. This book has changed my whole view on life, for everyone, gay, straight and everything else. Wow!

A truly touching and meaningful story

I have read a lot of queer YA stories recently and this one stands out the most by far. Not only does it deal with important topics and addresses them with great care, it is also a beautiful story that touches you and sticks with you long after finishing.

Did I bawl my eyes out at the end? Yes. Was it worth it? Definitely. This story of beautiful, authentic characters and important messages is the most perfectly wrapped history lesson of queer culture and the AIDS crisis imaginable.