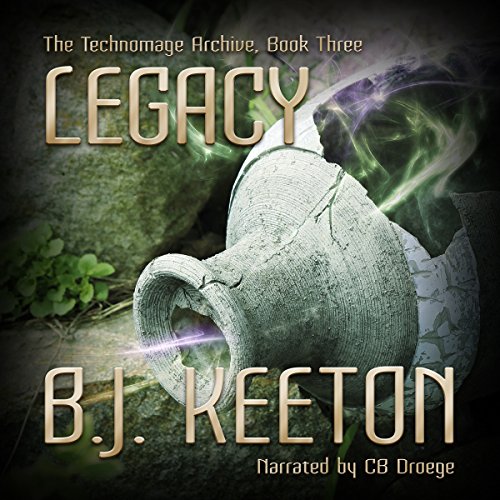 The Untouchable has returned.

The demigod's telepathic control of his people has made Erlon a peaceful world. But people are disappearing, and their friends and families don't remember them once they're gone. Something is upsetting the Untouchable's carefully controlled paradise.

Saryn, Chuckie, and the rest of the Charons have spent the decade hiding, but not resting. Saryn has found a way to sever the Untouchable's control over the people of Erlon. But if they use it, people may die. Lots of people. Saryn and Chuckie must decide if the price of freedom is too high, and whether or not they have the right to pay it in the first place.

Legacy concludes the epic trilogy with old friends, new faces, and a final confrontation where the fate of the universe hangs in the balance.

Legacy is the third and final installment of The Technomage Archive, an epic fantasy adventure quest set in a science fiction world.

Disappointing production, in need of editing!

While the earlier installments of this story was obviously amateur, this last installment is so marred by a lack of editing that it becomes extremely frustrating. So many times the reader goes back to correct an inflection, but the mistakes were never edited out! Once I could forgive. A dozen times in, I considered returning the book. In one case, the reader had to go back to negate an adverb, and it was absolutely jarring, like hitting a pothole at 70 mph.

This novel is awkward at best since the protagonist of the previous books is... Otherwise occupied. And the antagonist is too powerful to allow hope for a solution. Didn't care for that imbalance. But it was weird how mid battle the villain would give the characters time for their witty and sappy dialog.

Excellent end to the series

The series wraps up nicely in this 3rd installment. The inspiration found in parts 1 and 2 are clear in this as well. Very enjoyable series. I could really see the characters in my mind. I would love to see this visually realized. The world building and character are excellent and the action is well written. If you are a fan of Star Wars and RPGs or you like your sci-fi with a fantasy flavor this series is for you.