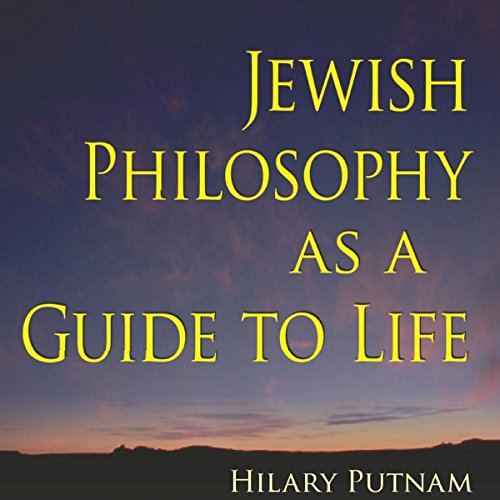 Jewish Philosophy as a Guide to Life: Rosenzweig, Buber, Levinas, Wittgenstein (The Helen and Martin Schwartz Lectures in Jewish Studies)

Jewish Philosophy as a Guide to Life: Rosenzweig, Buber, Levinas, Wittgenstein (The Helen and Martin Schwartz Lectures in Jewish Studies)

Distinguished philosopher Hilary Putnam, who is also a practicing Jew, questions the thought of three major Jewish philosophers of the 20th century - Franz Rosenzweig, Martin Buber, and Emmanuel Levinas -- to help him reconcile the philosophical and religious sides of his life. An additional presence in the book is Ludwig Wittgenstein, who, although not a practicing Jew, thought about religion in ways that Putnam juxtaposes to the views of Rosenzweig, Buber, and Levinas.

Putnam explains the leading ideas of each of these great thinkers, bringing out what, in his opinion, constitutes the decisive intellectual and spiritual contributions of each of them. Although the religion discussed is Judaism, the depth and originality of these philosophers, as incisively interpreted by Putnam, make their thought nothing less than a guide to life.

"Putnam is a master teacher, and his elucidations are valuable in themselves." ( Shofar)
"One of the most distinguished analytical philosophers, Putnam has written an unusual book that uses the thought of key philosophers to find points of commonality between the religious and the philosophical." ( Library Journal)
"Written by the distinguished emeritus professor of analytical philosophy, this intriguing little study is a concise presentation of three figures in modern Jewish thought: Franz Rosenzweig, Martin Buber, and Emmanuel Levinas." ( AJS Review)

In hiring someone to do a narration of JEWISH philosophers, I would have brought in someone who could pronounce German well. Lenard does not and it's a distraction. He uses two different pronunciations for Wittgenstein - "ei" in German is pronounced like English "i" - and the name is correctly pronounced Vit-gen-stine (W has a V sound). While I get that many do get that wrong and make the "ee" sound to have a narrator go back and forth between the two is just sloppy.

A compelling introduction to a few Jewish thinkers

I found this worth a second listen and I will likely return to it again. A background in philosophy was definitely helpful to comprehend the material. Putnam is a seminal Analytic philosopher and I was surprised to find him writing on a religious subject. The spiritual aspect of life that can make it truly meaningful, which early Wittgenstein relegated to being left unsaid, Putnam discusses through the lens of three twentieth century Jewish philosophers and a spritz of Wittgenstein. He maintains a bit of his skepticism for capital T Truth, but well articulates how living an others directed life which ritual and irreducible aspects of spirituality can make life rich with meaning. Levinas, whom he discusses, has been added to my growing list of must reads. A philosophy that starts with the ethic of presenting all we are to those before us in phenomenalogical language sounds, to me, quite exhilarating and humanizing. Putnam succeeded in stirring my interest to investigate the other thinkers.