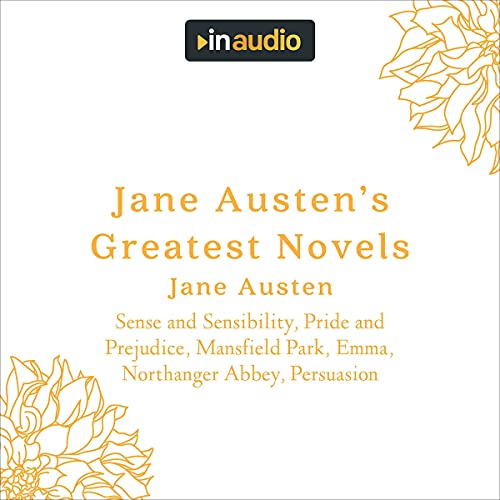 Delve into the romanticism and imagination of Jane Austen in this collection of Austen’s greatest novels. Covering the span of her career, these six novels are just as charming now as they were two centuries ago in their first publications.

Sense and Sensibility – Austen’s first novel tells the story of the Dashwood ladies – Elinor, Marianne, and Margaret – as their family is forced to move to a new estate. Elinor and Marianne, the oldest of the trio, come of age in a tumultuous time, and the novel focuses on their romances, tribulations, and relationships with one another as they grow up.

Pride and Prejudice – Perhaps the most well-known and beloved of Austen’s novels, Pride and Prejudice is a story of love, redemption, and opening one’s heart and mind to something unknown. Elizabeth Bennet is part of family of girls in pursuit of husbands, but when she is approached by a man she views as prideful, she refuses his advances. Through a story full of comedic and heartbreaking moments, Elizabeth learns to look past prejudice to find something more.

Mansfield Park – When Fanny Price is very young, she is sent away to live with her aunt and uncle at Mansfield Park, a large estate filled with all of Fanny’s insufferable cousins and family members. The novel follows her life from childhood to adulthood at Mansfield Park as she grows up surrounded by cruelty and winds up in the middle of the dramatic romantic entanglements her family develops.

Emma - Emma Woodhouse has successfully played matchmaker for her friend and discovers that she has a taste for setting up romances. The matchmaking quickly gets out of Emma’s hands, and though she means well, each new connection creates difficulties and confusion.

Northanger Abbey - Catherine Moreland is an avid reader, a lover of sports, and an imaginative young woman. She loves to read gothic fiction, a romanticized, dark, and mysterious genre. As Catherine grows older, her imagination begins to get the better of her. Everyday scenarios become romanticized and dramatic, natural deaths become mysterious, and innocent motives are questioned as Catherine fancies herself a character in a Gothic drama.

Persuasion - Persuasion follows Anne Elliot, a strong young woman, as she is reacquainted with her once-fiancé Frederick Wentworth. The story follows the duo and their families as they face financial troubles, the strong emotions of jealousy and unrequited affection, and the societal pressures of the age. This is a story of the power of being true to one’s self and the power of love above societal struggles.