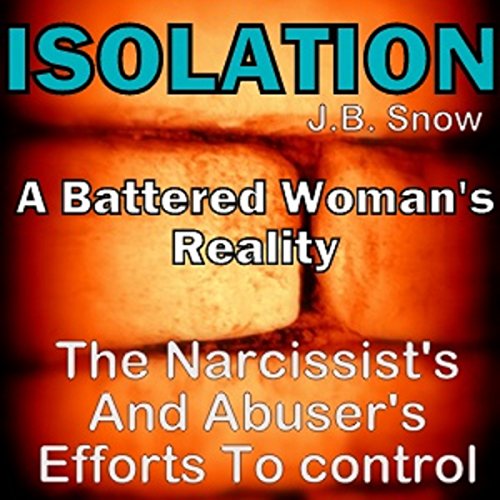 Many victims don't realize it, but the constant efforts of the narcissist to isolate the victim are the result of him wanting her under his complete control. The narcissist's partner is to be critiqued, blamed, shamed, isolated, and gaslighted into utter and complete submission to him. The narcissist is a hedonist and a sadist, and the only thing that he wants from his prospective partners are blind loyalty, ignorance, compliance, and cooperation.

The narcissist views his wife or partner as "his". She is his possession, even if she doesn't feel like he cherishes her on any level. More often, he treats her poorly so that she does not get a "big head" and leave him for a better alpha. The narcissist knows deep down that women are not naturally monogamous, but that they will often leave a beta or alpha man turned beta in seek of a better alpha. He has witnessed this happen to his friends, family members and acquaintances. He has heard from other men who have been victimized by women, thus he cannot let this woman get the "upper hand", no siree!

The delicate ego of the narcissist cannot tolerate "losing" his partner to another mate, because he believes in his own specialness. His competitive nature is due to his evolutionary need to procreate and pass his legacy along to future generations, though he won't claim to know why he does many of the things that he does.

His family of origin has a need for their legacy to be passed on, thus he will be supported in his desire to control his partner and the children that she bore for him. He is told to keep her in her place at all costs. He must ensure his children are reared to also be respectful and controlled and obedient.

To not do so earns great scorn and disrespect from his parents and grandparents, as he has lost control of his own household to a member of the weaker sex! Blame, shame and rejection are not tolerated by the competitive narcissist! He best not be disrespected by anyone! If someone dishes it out to him, they best be prepared to take his wrath and the wrath of his narcissistic family members!

Many of the narcissist's needs, wants and desires cannot be explained by him. He goes along with his impulses, urges and instincts because they feel good. He is a hedonist in that he much prefers a life of pleasure over pain. He might identify with a religion if his family has brainwashed him into identifying with one, or he may convert to a religion which suits his hedonistic desires in order to have an excuse for his ill-mannered behavior.

This audiobook seeks to examine the devastation that is caused by the very act of isolating his partner in nearly all realms of her life and her existence. Omniscience and omnipresence is the ultimate goal of the narcissistic partner. He must be everything that there is in her world, less he risks losing her to the competition.