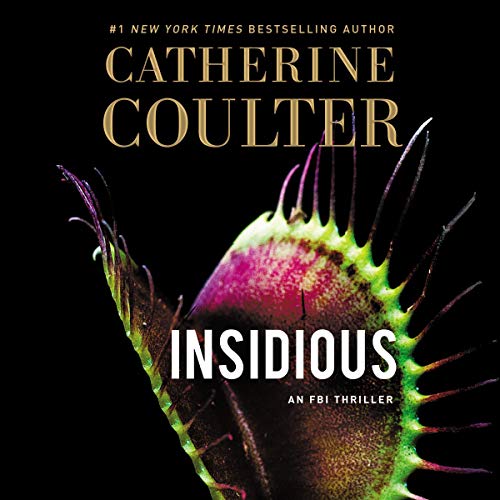 Insidious is the twentieth thriller in #1 New York Times bestselling author Catherine Coulter's FBI series. FBI agents Savich and Sherlock must discover who is trying to murder eighty-six-year-old Venus Rasmussen, a powerful, wealthy society icon. They soon find out that the danger may be closer than expected.

Venus Rasmussen, a powerful eighty-six-year-old woman who still runs Rasmussen Industries, an international conglomerate, believes someone is poisoning her. Who's trying to kill her and why? A member of her rapacious family, or her grandson who's been missing for ten years and suddenly reappears? Savich and Sherlock must peel away the layers to uncover the incredible truth about who would target Venus.

Meanwhile, Special Agent Cam Wittier leaves Washington for Los Angeles to work with local Detective Daniel Montoya to lead the hunt for the Starlet Slasher, a serial killer who has cut the throats of five young actresses. When a sixth young actress is murdered, Cam comes to realize the truth might be closer than she'd ever want to believe.

With breakneck speed and unexpected twists and turns, Coulter's Insidious will leave you breathless until the shocking conclusion.

Enjoyed listening to the two plots of the story and the two narrators were entertaining.

Insidious: Designed to entrap orKeep me listening to a disconnected story

This was my least favorite of the several Catherine Coulter novels I've listened to on Audible. Either the abridgment cut out a story line weaving the two stories together or there just was not one. I went back and listened to the majority of it twice to hear if I missed something. I didn't- there was no connection. Neither story was good enough or well-scripted enough to be a book on its own. Don't waste your time.