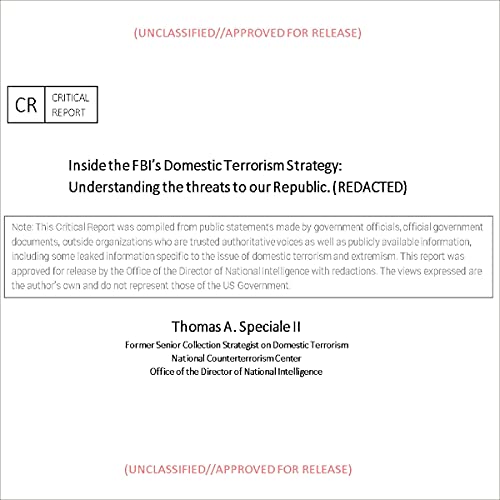 Inside the FBI’s Domestic Terrorism Strategy

Many Americans today have lost faith in the US government and see specifically the Federal Bureau of Investigation (FBI) as threatening them as opposed to protecting them. Many Americans, the author included, are deeply concerned about potential government overreach and threats to our liberty and freedom, specifically regarding the First and Second Amendments of the constitution. Unlike the vast majority of those who have lost faith in the government, the author has not, and this report was compiled to help frame the correct conversation, one not driven by political rhetoric or motivated by bureaucratic distortions. The author believes, if we can have this conversation, we can avoid disaster.

This critical report was compiled from public statements made by government officials, official government documents, outside organizations who are trusted authoritative voices, as well as publicly available information, including some leaked information specific to the issue of domestic terrorism and extremism. This report was approved for release by the Office of the Director of National Intelligence with redactions. The views expressed are the author’s own and do not represent those of the US Government.

Every American Needs to Hear This

This comprehensive, thoroughly researched and documented report is clearly articulated by the author, who makes some critically important points that every American needs to hear.

I highly recommend this to every American who loves the Constitution and the rights it guarantees.