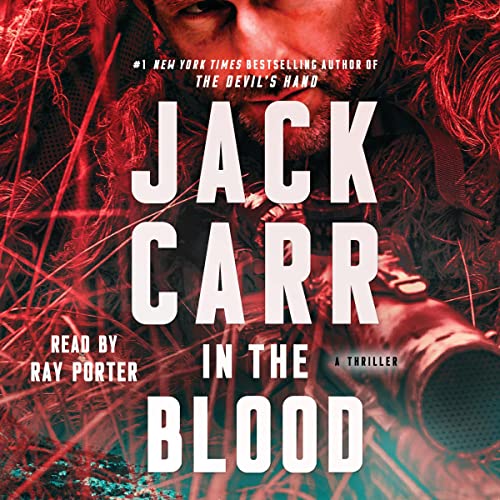 ​“Take my word for it, James Reece is one rowdy motherf--ker. Get ready!” (Chris Pratt, star of The Terminal List, coming to Amazon Prime)

A woman boards a plane in the African country of Burkina Faso having just completed a targeted assassination for the state of Israel. Two minutes later, her plane is blown out of the sky.

Over 6,000 miles away, former Navy SEAL James Reece watches the names and pictures of the victims on cable news. One face triggers a distant memory of a Mossad operative attached to the CIA years earlier in Iraq—a woman with ties to the intelligence services of two nations…a woman Reece thought he would never see again.

Reece enlists friends new and old across the globe to track down her killer, unaware that he may be walking into a deadly trap.

Excellent addition to the series…

Won’t say too much or Audible probably won’t publish. This is a super addition to the James Reece series. I was a little surprised with so much techno-thriller, the last thing expected when I picked up a Jack Carr book is sci-fi and quantum computers. But that’s exactly what I got. Fear not, Carr doesn’t stray too far and he gets back onto his tried and true track in just a short time.
This is book #5 in the series. I don’t think it is necessary to listen to the complete series in order. However I do think book one and preferably book two as well should be listened to for background. But if not interested then this can be listened to as a complete standalone.
In this installment Reece is after a man who shot down a plane in Africa. There was a woman on board with dual citizenship between the US and Israel. She also worked for both the CIA and Mossad. The bomber is known and Reece is on his trail almost immediately.
This is a fast paced, testosterone fueled, action packed thriller that anyone who likes this genre should thoroughly enjoy.
Ray Porter (as always) does a wonderful, fantastic , excellent, (and more) job narrating.
This book has my HIGHEST RECOMMENDATION.
If you found this review helpful please indicate so.
Thank You.

This series got me into thriller novels and I have searched around while waiting for the next ones to come out and although I love Brad Thor and numerous other authors, Jack Carr has it nailed in my opinion. I love his attitude I love his writing style and I love listening to his podcast and how he conducts himself! I’m an Army combat vet and it pains me to hear him read the negative reviews by people who have no clue and want these stories catered to their fantasy reality. Obviously he really takes these books seriously and puts a lot of work into them. Furthermore, I believe he is right on target in both political statements and observations in the current state of the greatest country on earth, America the beautiful. United we stand, divided we fall. Thank you for continuing to make these novels Sir

I lost all respect for this author when he referenced Fox News and his ideology filtered in to this story. His ability of not adjusting to reality of war vs politics and diplomacy; however he’s correct about Russia controlling the United States but he failed to mention that they controlled one political party hook line and sinker.

I was really excited to find a new series for my commute and picked this up cold on audible. I accidentally bought the book out of order but figured i give this one a few commutes (2 hours or so) to test the waters before going back and starting at book 1. Firstly, this kind of content is typically right in my wheel house- but this one really, really just talks AT the listener about themes that would be interesting if they weren't so On-The-Nose. Everything is here to build a deeper emotive narrative (honor, duty, brotherhood, courage) but amazingly these themes quickly become tired, one dimensional and one-note for the extended time it takes to fill the space until you get another sponsored content, ®, ©, ™ product placement awkwardly stuffed into a rundown of another unbelievably one dimensional characters "tacticool" gear. Fine, ok, I like that stuff too, but this was like daring someone that they couldn't freestyle a semi-coherent story in realtime while having to incorporate things from their Instagram interest page. I actually made a bet with myself about an hour into the book that at some point there would be a character that drove an Icon truck. I legit almost crashed my own car patting my own back when it showed up. Its like a really meta game of "obvious veteran guy Bingo". Sure i can see how this would appeal to some people, but i would venture a guess it lands extra hard with the types that are just WISHING one day they get to 'Stand their Ground.'
I wish Jack all the best in this venture and thank him for his service. But this is not what i would recommend if you are looking for a 'thinking mans' thriller.

Jack Carr has a way of making you feel a part of the action. And does a phenomenal job at portraying the human side of those on the front lines!

Can’t even finish this

Third book in a row of going into fine detail about the name brands of weapons and accessories instead of telling a story. First twenty minutes is just a giant cheesy ad for pathetic meal team six posers.

More than meets the eye.

There is depth to the storyline that may elude many. Plenty of techno thriller action for everyone, but much more to the observant.

Wow!! Perhaps the best of the series thus far! Story is at least the equal to “Terminal List.” Mr. Carr’s skill as an author continue to grow and mature. I look at the evolution of James Reece’s universe and compare it to his fellow fictional protagonist peers such as Flynn’s Mitch Rapp, Thor’s Scot Harvath, Greaney’s Court Gentry, etc., and the overall growth of each character five books in. To me, Jack Carr has developed a richness and depth of character to a point equal to and, in many ways, exceeding each of these beloved good guys. Well done, indeed! Cannot wait to see the adapted version coming to life via Chris Pratt this summer. With such a punch of an ending, the only “negative” is the 1 year wait for book 6!

Great intro to a great story. Many principles of truth shared with an entertaining story that most can relate to if they lose the hubris.

Jack Carr has created a morally reflective compelling work of Art. Like all great works of art it is a vehicle to convey truths, in this case how violence breeds more violence and the morays and unknown complexity that our technological creations bring.

Another great one, can’t wait for the next one. Extremely accurate and engaging. Intricate storyline, with exquisite research done by the author.