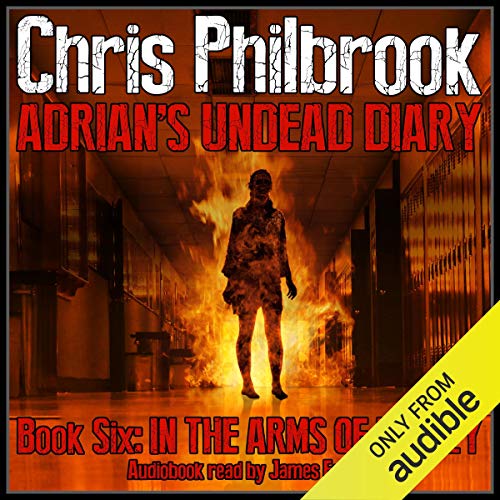 In the Arms of Family

In the Arms of Family

Adrian Ring and evil don't get along. When he can't be corrupted, turned, or forced to give up, evil will target those around him, including the family he had thought was dead.

In Book Six of Adrian's Undead Diary, no one near Adrian is safe. Many will make the ultimate sacrifice to ensure that he can keep his loved ones protected at any cost, and rebuild a new, better world. In the Arms of Family also follows Kevin and Michelle as their stories entwine and bring them ever closer to the horrors that surround Adrian across the vast Atlantic Ocean. How long can they survive before the dead finish what they came to do?

Book Six of the massive Adrian's Undead Diary post-apocalyptic zombie epic is here at last! In the Arms of Family contains Adrian's journal entries from June 23, 2011 through August 30, 2011. It also is the home for Under the Moroccan Sun, The Great Fire, Becca, and Paranoia Island.

Five Star Review Across the Board.

Chris Philbrook rocks. I LOVE this series of books, it ranks in my top five favorite zombie genre of all time.

The latest installment takes you further down the 'rabbit hole'. Adrian and friends feel like family at this point. It's good stuff and I can't wait for the next book to come out on Audible.

Adrian's UnDead Diary-is one of the best series of books I've had the privilege of listening to. The author and narrator are a sublime combination. I feel emotionally vested in the lives of the characters. Each time Otis, the cat, is mentioned I can't help myself, I smile. The author, Chris Philbrook has penned intriguing characters. The narrator, James Foster brings the characters to life. Now the waiting game begins...I must wait for the release of Trinity (Adrian's Undead Diary Book 7) in audio format.

I can't say enough good things about this series. Adrian, Abby, Gilbert, Patty - now Michelle, Kevin and Hal are there too - the family is getting pretty big.
Enjoy the book!

This is the sixth book in the Adrian's Undead Diary series. You will need to have read the others to enjoy this one. If you have read into the series this far, keep reading! You won't be disappointed. This book has the journal format of the other books as well as vignettes like those featured in the last book. This book still has action and survival, but as the series progresses, each book really settles into character and story development. These are not only gory zombie fare. The story is really getting interesting. Oh the feels!!

This book and the rest of the series is all good stuff. Seriously.

Fuckin love this series so good money well spent highly suggest to any zombie fans out there.

What made the experience of listening to In the Arms of Family the most enjoyable?

One part I really liked about this book is the new characters he introduces you to here, and how things take parts of the other books and ties them together, but also generating more twists and turns in future books.

The best part of this book is just when you think you know what happens this book changes things. It does a great job of setting up plot twists that get carried out in some of the other books.

already mourning that it will end...

I know it has to, but dang! The narration is great, and Adrian's mix of rapid humor and despair are a perfect balance.

FABULOUS ADDITION TO THE SERIES!!!

I totally would recommend this whole series!

That Adrian found his family! It was about time he got a break!

Which character – as performed by James Foster – was your favorite?

The only thing I ate about this book is that it is over now and I do not have audible credits to buy the last 2! *Throwing a fit* LOL I guess I will have to wait!

Super awesome addition to the series, we are getting closer and closer to what I suspect is going to be a final battle of sorts...I am super happy for Adrian that he was able to find some of his family, it was about time he got a little break...I am thrilled that I discovered this series and cant wait to finish it, even though I am going to have to for a bit...life is so unfair sometimes! lol

What made the experience of listening to In the Arms of Family the most enjoyable?

All of it. Holds me attention completely

He really nails the character, he IS AUD for me.